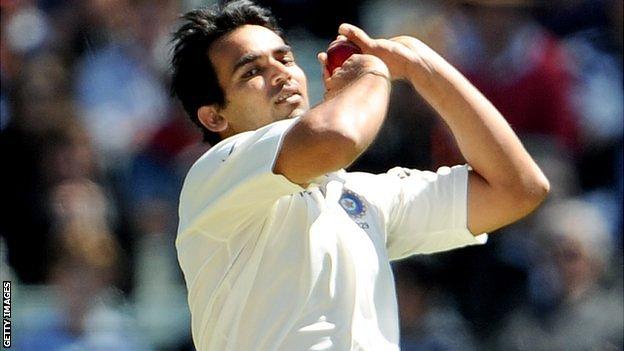 India have dropped Zaheer Khan, Yuvraj Singh and Harbhajan Singh from their squad following their seven-wicket defeat by England in the third Test.

Sachin Tendulkar, 39, keeps his spot and Mahendra Dhoni remains captain, despite calls for them to be dropped.

India need to win the fourth Test in Nagpur to avoid a series defeat.

England lead the series 2-1 and if they avoid defeat will end their 27-year wait for a series win in India and condemn their hosts to a first home loss since Australia won 2-1 in 2004.

Victory in the final match for Alastair Cook's men would also see India lose three matches in a home series for the first time since West Indies side triumphed 3-0 in 1983.

Dhoni is facing intense pressure, with the Times of India calling for him to be dropped, but the wicketkeeper-batsman insists he is the man to take the team forward.

"Leading a side is all about doing it when the team is not doing well, trying to gel them together, back the youngsters and the senior guys.

"The easiest thing for me to do right now is to give up the captaincy and be part of the side, because that's just running away from the responsibility.

"I have to get the team together, and be prepared for the next Test."

Delhi seam bowler Awana, 26, has taken 131 wickets in 40 first-class matches and played against England for India A in a tour match last month, taking 0-60 from 12 overs.

Left-hander Jadeja, 24, has played 58 one-day internationals, scoring five half centuries at an average of 28 and taking 57 wickets with his slow left-armers.

Chawla made his Test debut aged only 17 against England in 2006, taking one wicket, but played in only one more Test, against South Africa in 2008, when he took 2-66.

Dhoni does not believe that India are at their lowest ebb in his tenure, citing instead whitewash defeats away to both Australia and England.

"We were not really able to compete then. We know what our faults are here, and I think we should be able to rectify them."

Dhoni said his side needed to "retaliate" in Thursday's final Test after being comprehensively outplayed in Kolkata.

"Everybody needs to pull up their socks, give their best and back each other, that's where you show your character," said Dhoni.

"I think the batting order will have to take the responsibility. We need to score more runs to give the bowlers a par total to defend, otherwise it's very difficult and you find yourself under pressure."

Former England coach Duncan Fletcher has also had his critics since taking the same position with India, and has now overseen six Test defeats out of seven home and away against his old team.

Dhoni, however, insists Fletcher is not to blame. "The coach has excellent technical knowledge about batting, and guides the players in the right direction," he said.

"Ultimately, once you cross that rope, you are on your own. That's where we are lacking as of now. It's wrong to question the coach, because we have won quite a few series."