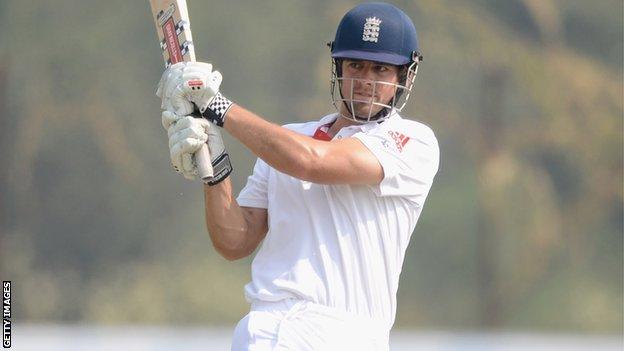 England captain Alastair Cook praised the character of his side following their seven-wicket win over India in the third Test in Kolkata.

After losing the first Test, England lead 2-1 and will earn a first series win in India since 1985 if they avoid defeat in the final match in Nagpur.

"I can't fault the character they have shown since Ahmedabad," said Cook.

"I can't praise the lads enough, but we have to keep our feet on the ground because we're here to win the series."

Just as in the the 10-wicket second Test win in Mumbai, the victory in Kolkata came after Cook lost the toss and was asked to field first.

But England restricted India to 316 all out, with the bowlers again coming to the fore to take six wickets for 36 runs on the fourth afternoon to halt the hosts' second-innings revival.

"It was a great performance level for four and a half days. Everyone performed from one to 11," Cook, on his first tour since being appointed as Andrew Strauss's successor, told BBC Sport.

"To keep India to 300 on that wicket was a fantastic effort and to get six wickets in that session really won us the game. It was a credit to the hard work they've put in that they can perform in these conditions."

Cook made 190 - an England record 23rd Test century - in the tourists' first-innings total of 523, but was denied a double hundred by a bizarre run-out.

The left-hander, in easy reach of the crease at the non-striker's end, moved to avoid Virat Kohli's throw, which then hit the stumps to leave the opener short of his ground.

"I just wasn't thinking and before I knew it I was out," said the Essex man. "It was a frustrating way to go, but if someone offers you 190 before the game you take it.

"The record means a huge amount. I was probably more emotional when I got the 22nd century, but it means a lot to be on top of that list."

Cook's efforts helped England to a lead of 207 and the tourists looked set for an innings victory when India collapsed on the fourth afternoon.

However, Ravichandran Ashwin's 91 not out stretched the game into a fifth day, with England eventually set 41 to win.

They slipped to 8-3 - including Cook, stumped in the first over - but were taken across the line by Nick Compton and Ian Bell.

"It's a great win, especially after losing the toss on a wicket like that," Cook continued. "It's not 'job done' though, there's still five days in Nagpur to go."

Fast bowler James Anderson, who took six wickets in Kolkata, told BBC Sport's Sportsweek programme: "After the first Test we thought it would be tough, but we bounced back last week and to produce an equally impressive performance this week is really special.

"Alastair Cook has been brilliant. He likes to lead from the front and by example and he's clearly doing that at the moment.

"It's vital for the team to get a big first innings score and his 190 was crucial in us doing that here."