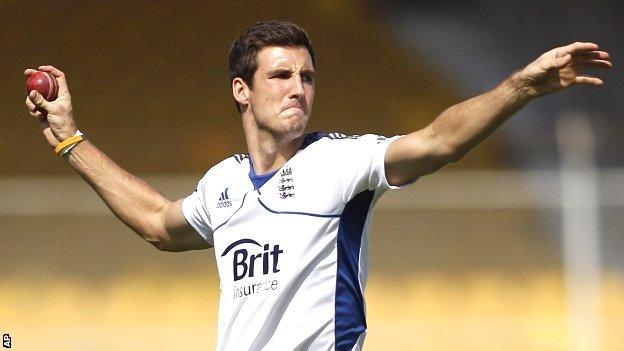 England seamer Steven Finn could miss the final Test against India after suffering a disc strain in his back.

The 23-year-old will have a fitness test before play in Nagpur on Thursday as England look to earn a first series win in India since 1985.

Tim Bresnan or Graham Onions could step in to replace Finn or James Tredwell may be deployed as a third spinner.

Stuart Broad has been ruled out with a bruised heel and remains a doubt for the subsequent Twenty20 internationals.

Broad, England's T20 captain, lost his place to Finn for the seven-wicket third Test win in Kolkata after failing to take a wicket in the first two matches of the series.

The 26-year-old is due to lead England in the two T20 games and will be reassessed over the next 24 hours ahead of the opening contest in Pune on 20 December.

"It's the nature of sport, isn't it? Some people have good tours and some people don't.

"Unfortunately, more down to niggles and illnesses, Broady hasn't quite managed to get into the tour.

"It's frustrating for him and disappointing for us as a side. But we all know the class of Broady, and he'll be back."

Victory in Kolkata followed a 10-wicket win in Mumbai, leaving England needing to avoid defeat in Nagpur if they are to end the 27-year wait for a series win in India.

If Finn is ruled out, England could turn to Bresnan, who struggled in the series-opening in nine-wicket defeat in Ahmedabad or Onions, who has not played a Test since June.

Less likely is the inclusion of Kent off-spinner Tredwell, whose only Test appearance came in Bangladesh in 2010.