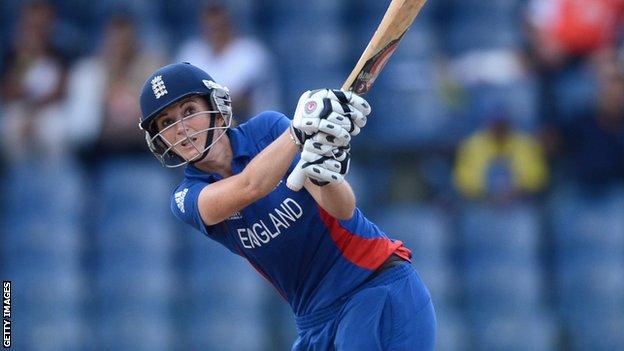 Charlotte Edwards will lead England in their defence of the Women's World Cup after being named captain of a 15-strong squad for the 2013 tournament in India.

Edwards, 32, will be joined by seven members of the team who won the trophy in Sydney in 2009.

The one uncapped player included is Amy Jones, while Georgia Elwiss has earned her first call-up for a global event.

The tournament takes place from 31 January to 17 February.

Edwards, who will be making her fifth World Cup appearance, said: "I'm so proud to be captaining such a talented team in what is the pinnacle event in our sport.

"There is a great blend to our squad with a combination of experienced players who were part of the 2009 success and emerging young players who have already shown that they can perform at this level.

"Every player in our squad has experience of playing in sub-continental conditions and we will continue to work hard during our final preparations so come February we are in the best possible shape to defend our title."

England are in Group A with India, Sri Lanka and the West Indies.

Their first game of the tournament is against Sri Lanka on 2 February.

Head of England Women's Cricket, Clare Connor said: "So many players have impressed during 2012 and this final group of 15 should be congratulated on their selection.

"They have the honour of going to the World Cup as the current world champions and we wish them every success in rising to the challenge of bringing the trophy home again."