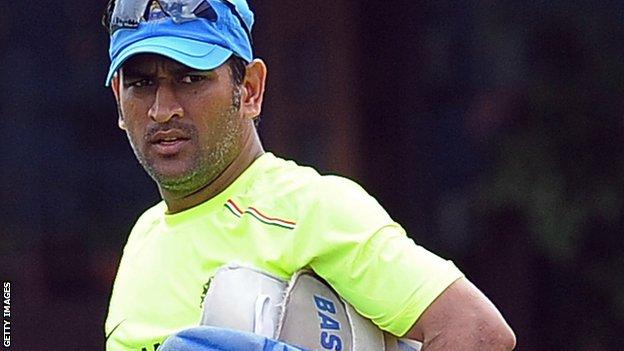 Captain Mahendra Singh Dhoni says India must stick by their experienced players as they try to rescue a series draw by winning the fourth Test in Nagpur.

England lead 2-1 and are aiming for a first series win in India since 1985.

Defeats in Mumbai and Kolkata have led to calls for Dhoni and record Test run-maker Sachin Tendulkar to be dropped.

But Dhoni, 31, said: "You have to be consistent and you have to keep faith in the players - people who have done a lot for Indian cricket over the years."

Dhoni and Tendulkar, who average 18.4 and 22 each so far in the series, retained their places in the squad for the final Test although Zaheer Khan, Yuvraj Singh and Harbhajan Singh were left out.

Reports in India claim that Dhoni was almost sacked after losing every Test of their summer tour to England but he would not be drawn on whether he will continue in the role after the Nagpur Test, which starts on Thursday.

"Let's see. [I will] while I am enjoying it, because that's very important," he said.

"If you're not really enjoying the sport, then it becomes very difficult.

"In a way it's good that we are in a position like this. We have nowhere to go and have to do well in this game."

Team-mate Tendulkar batted doggedly to reach 76 in the Third Test but is struggling for form, making just just 110 in five innings.

Amid claims that he set to announce his retirement, Dhoni insists the 39-year-old is still a key member of the team.

"He's the best man to have in the side in a game like this, the amount of experience he's got and the kind of performances he's given under pressure over the years," he added.

"He has proved everybody wrong throughout his career."

Alastair Cook has warned that he expects India to come out fighting as he tries to become the first captain to lead England to a series win in India in 27 years.