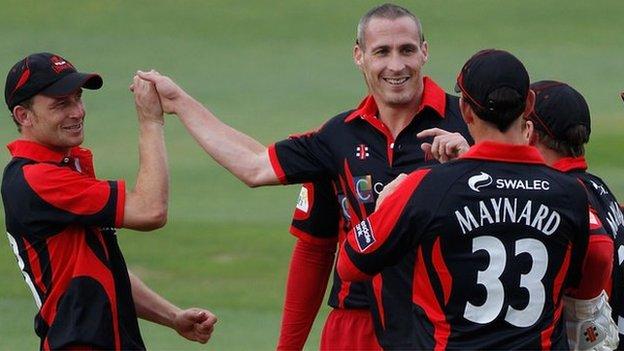 Fast bowler Simon Jones will play four-day cricket for Glamorgan next season after renegotiating his contract.

But after playing one four-day match during the summer, he has agreed a new deal which adds six County Championship matches to his commitments.

"I've agreed to do these four-day games because I don't want to leave anything in the tank," he told the Back Page.

Jones has a history of knee problems which have curtailed his England career and limited his appearances in the county game.

But the seam bowler says he is confident he can manage his troublesome knee and help Glamorgan challenge for promotion from Division Two of the County Championship.

"It's a continuous thing, I have to look after it," said Jones of his knee.

"I have to do the right preparation in games, I have to rest up properly.

"It's hard work, but it keeps me playing the game I love so it's not a hardship.

"I'm 34 on Christmas Day, I still feel I've got a couple of years left in me and that's why I've agreed to do these four-day games.

"It's one of those things. I just want to get everything out of my system so when I finish I know I've done everything I can in the game and then I can relax and just chill with the kids.

"I have to play six four-day games and obviously a number of one-day games as well, which I'm backing myself to do. It's the best I've felt in a long, long time."

Jones' knee problems stem from an incident in Brisbane in 2002.

The Welshman ruptured an anterior cruciate ligament sliding to stop a ball in the field during the first Test between England and Australia at The Gabba.

That injury kept him out of the game for 18 months.

And even though injuries have plagued Jones ever since, he is confident his knees will stand-up to the rigours of the four-day game.

"I felt good in the four-dayer I played last season, it was at Derby and the ball was coming out nicely.

"It's just a matter of spacing the games out that I get the rest in between each game so that the knee is fine and I can crack on.

"There's a lot of Championship games to be played and I feel that if I do play in the six I feel I can help Glamorgan get towards the top of the table and hopefully get promotion."