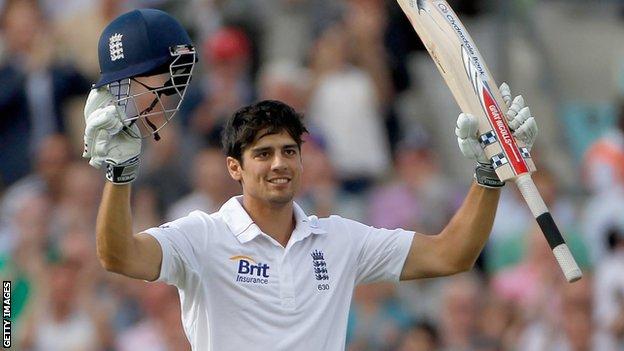 England captain Alastair Cook says he thinks the first series win in India in 27 years is "on a par with the Ashes".

Centuries from Jonathan Trott and Ian Bell secured a draw in the fourth Test in Nagpur and a 2-1 win in the series.

"In that dressing room, knowing what we had achieved, it was a special place and will live long in my memory."

England's success was all the more impressive given their terrible start to the series. A nine-wicket thrashing in the opening Test led to gloomy forecasts of a 4-0 series whitewash.

"Of course there was doubt," said Cook, 27, who was named man of the series after scoring three hundreds and 562 runs in the four-match series. "There is always doubt, especially halfway through day two [of the first Test] when we were getting rolled.

He added: "We didn't handle the Ahmedabad wicket well but the others were all very different and we adapted well. The bowlers have been brilliant and our batters have contributed big runs.

"There were handshakes, hugs, embraces and slaps on the back all around in the England dressing room. They have worked so hard in this series. What odds were there on us witnessing that? It's quite remarkable. They have done it the hard way, through outstanding leadership on and off the pitch."

"Everyone in the squad can be very proud, especially after Ahmedabad and that heavy defeat. The guys who played a couple of games all made a difference and the amount of effort the guys have put in for me, I can't ask any more.

One of the "guys" who was drafted into the side was Monty Panesar, and the Sussex-man took 17 wickets in the final three Tests as he dovetailed to devastating effect with fellow spinner Graeme Swann.

"Clearly we got it wrong in Ahmedabad in not playing Monty, but when we put it right he has been outstanding," Cook admitted.

"What was it, 50 overs for 80 yesterday? He's a captain's dream. You just throw him the ball and you know he's going to be there or thereabouts."

James Anderson, who was awarded the man of the match award after taking 4-81 in India's first innings, was described as the difference between the two sides by India captain Mahendra Dhoni.

The 30-year-old fast bowler took 12 wickets in the series and played a key part in England's success, alongside the spinners who normally prosper on the sub-continent.

"When we come over here, people think that spinners are going to get all the wickets but we knew that the seamers had a job to do," Anderson said.

"I've bowled better than I have before. Reverse-swing has been a key part of us doing well.

"We've really practised it in the nets and in the games leading up to the series. I think we executed our plans really well."