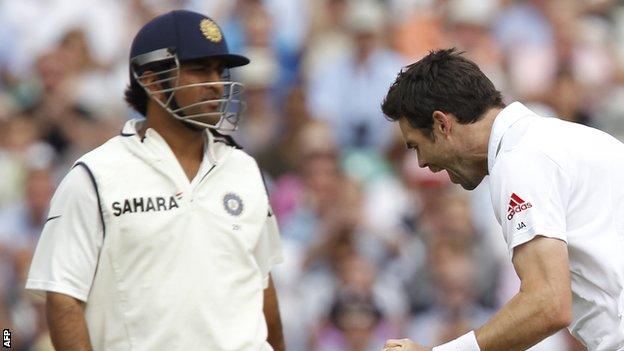 England drew the final Test in Nagpur to clinch their first series triumph in India since David Gower's side in 1985.

"We struggled in the batting department but the difference between the bowling sides was James Anderson," said Dhoni.

"India got sucked into believing that they were going to beat a poor England team and win 4-0. They never looked at themselves and they got complacent. Sachin Tendulkar is out of form and at the end of his career, Virat Kohli played some terrible shots in the series and Virender Sehwag was not at his best. They believed they were better than they were, but by the end of this series they and the Indian public have been forced to realise the truth. Whether they do anything about it is up to them, it's not our problem."

Dhoni also said "I hope so" when asked if 39-year-old batsman Sachin Tendulkar would continue his Test career after he scored just 76 runs in his six innings.

Tendulkar, who was voted the second greatest Test batsman of all time by respected cricket almanac Wisden, has endured a miserable 2012 in which he has scored just two half-centuries in 15 Test innings, with a top score of 80.

This poor form from the 'Little Master' had led to calls for him to retire, but Dhoni, when pressed on whether Tendulkar has told him whether he planned to quit, said: "No."

The match petered out to a draw after tea on day five, with England on 352-4 in their second innings - 356 runs ahead of the hosts.

The lifeless pitch in Nagpur attracted criticism from all quarters and Dhoni acknowledged it did not suit either side.

He added: "We bowled for 10 hours and we got three batsmen out. You can't just sit there and say we need to be aggressive.

"Aggression is not just about setting a silly-point or short-leg, or having a slip; you have to analyse where you can get a batsman out on a wicket like that.

"It's very difficult to make a good wicket in the subcontinent. They tried, but it's very tricky."