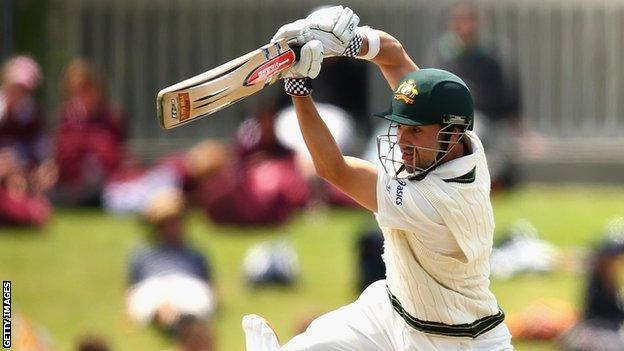 Nottinghamshire have signed Australia Test batsman Ed Cowan for the first half of the 2013 county season.

The 30-year-old is expected to be part of the team for next summer's Ashes series in England, but will be with Notts until the end of June.

Cowan will be available for eight CB40 games and seven Championship games.

"I feel very strongly we needed an opening batsman, and a left-hander is even more ideal," director of cricket Mick Newell told BBC Radio Nottingham.

"I met him last year and was impressed with the sort of bloke he was and his commitment to want to join a First Division team and play good quality cricket."

Our priority was to find a player who we felt could score a good volume of runs in four-day cricket, but Ed has a good one-day record as well

Cowan averages 34 from 11 Test matches but hit a maiden century against South Africa in Brisbane last month and Newell believes he can make a big contribution in all forms of the game.

Newell added: "Ed has an excellent record in Test cricket and there was an opportunity to sign him for a decent period.

"Our priority was to find a player who we felt could score a good volume of runs in four-day cricket, but Ed has a good one-day record as well and we're confident that he can make a difference."

Cowan's final appearance is likely to be in the CB40 game against Sussex at Trent Bridge on Friday, 21 June.

The left-hander, who had a spell with Gloucestershire last summer, said: "I was very keen to play some Division One cricket and I'm pleased to have the opportunity to do that with Nottinghamshire.

"There are a lot of good players at the club and Trent Bridge is a great venue so I'm hoping to make a good contribution."

Notts plan to sign a second overseas player to replace Cowan for the second half of the summer.