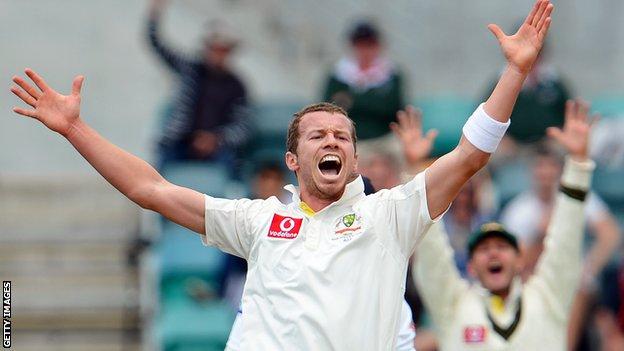 Siddle finished the match with figures of nine wickets for 104, while Starc took five for 63 in the second innings as Sri Lanka were bowled out for 255.

The victory gives Australia a 1-0 lead in the three-Test series.

The second Test starts on Boxing Day in Melbourne ahead of the final encounter in Sydney on 3 January.

Sri Lanka's struggles down under

Sri Lanka have now lost nine of 11 Tests in Australia.

Siddle, who was named man of the match, had come under scrutiny for allegations of ball tampering during Sri Lanka's first innings.

However, match officials confirmed they found no evidence of any wrongdoing.

Sri Lanka, chasing 393 to win, had looked like claiming a draw as they put up dogged resistance to reach tea at 186 for four.

However, Siddle removed Thilan Samaraweera (49) and Angelo Mathews (19) within eight overs of the evening session.

Starc then quickly took out the Sri Lanka tail, first removing the key wicket of Prasanna Jayawardene for 21.

He then had Nuwan Kulasekara (nine) caught behind by wicketkeeper Matthew Wade before bowling out Rangana Herath (eight).

Meanwhile, Australia have named the uncapped pace bowler Jackson Bird in their squad for the second Test.

Captain Michael Clarke has been included, although he is a doubt for the match after injuring his hamstring while batting on Tuesday.

Usman Khawaja is on standby as a possible replacement for Clarke.