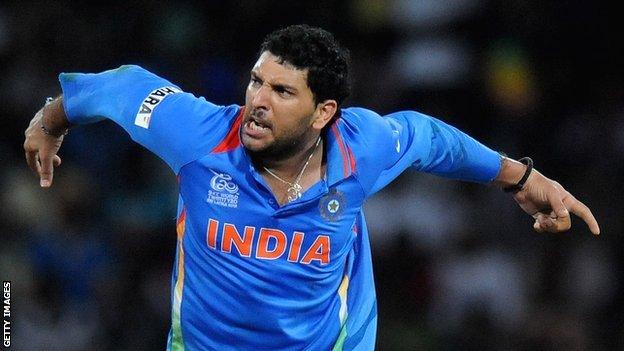 Yuvraj Singh starred with bat and ball as India won the first Twenty20 international against England in Pune by five wickets.

Having won the toss and inserted England, India restricted the tourists to 157-6 from their 20 overs.

Alex Hales hit 56 and Jos Buttler 33 but England's total was well below par. Yuvraj took 3-19 from his four overs.

In reply, Yuvraj top-scored for India with 38 as the hosts reached their target with 13 balls to spare.

England's bowling attack served up 10 wides and will have to be far more disciplined if they are to square the series in Mumbai on Saturday.

With regulars Kevin Pietersen, Graeme Swann and Steven Finn all rested after their exploits in the 2-1 Test series win and Stuart Broad injured, Eoin Morgan led an inexperienced England line-up.

Hales got the tourists off to a flyer, hitting Ashok Dinda for two fours in the first over.

Michael Lumb was out for one in the fourth over, the left-hander missing with a slog-sweep and finding himself trapped plumb in front by Ravichandran Ashwin.

But Lumb's Nottinghamshire team-mate Hales got stuck into Ashwin and fellow spinner Ravindra Jadeja, racing to 50 from only 26 balls.

Luke Wright joined in the fun, hitting three fours and one six in his 21-ball innings of 34 before mis-hitting Yuvraj to Ajinkya Rahane at long-off in the 11th over.

Wright's dismissal brought Morgan to the crease and India's bowlers managed to put the breaks on the new partnership.

And Hales, looking to break the shackles, was dismissed for 56 from 35 balls, playing all round a straight one from Yuvraj.

Morgan fell two balls later, skying Yuvraj to Rahane at long-on for five, and after an encouraging start England were suddenly wondering where the next boundary would come from.

A four through the covers by Samit Patel in the 15th over released some pressure but Yuvraj continued to strangle the innings, finishing with 3-19 from his four overs.

Buttler clubbed Ashwin for a pair of sixes in the 18th over but Patel fell off the first ball of the 19th, hitting Dinda to Rahane at long-off.

Tim Bresnan fell from his first delivery, chipping Dinda to Virat Kohli at long-on, before James Tredwell joined Buttler in the middle.

Buttler hit two successive sixes in the final over, bowled by Parvinder Awana, including a perfectly-executed scoop shot, and the late salvo carried England past the 150 mark.

However, England's score appeared to be 15-20 runs below par on a sound batting pitch.

Defending an eminently makeable target, England made a poor start, Jade Dernbach serving up three wides in the first over of India's innings.

The errant Dernbach went for 21 in his first two overs before Surrey team-mate Stuart Meaker brought some discipline to England's attack.

But it was Tim Bresnan who made the breakthrough when Hales caught Gambhir on the deep square-leg boundary for 16.

Kohli should have gone first ball only for Meaker to shell a regulation catch at short long-leg, but Rahane fell two balls later for 19, spooning a slower ball bouncer from Bresnan to Patel at long-on.

However, Yuvraj hit left-arm spinner Danny Briggs for 18 off his first over, including two sixes, as the pendulum swung firmly back in India's direction.

Yuvraj made a dashing 38 from 21 balls before he was dismissed by Wright in the 10th over, holing out to Meaker at deep square-leg.

Morgan perhaps should have run out Kohli after he was sent back by Suresh Raina but Kohli was gone for 21 in the 12th over, dragging Meaker on.

Morgan definitely should have run out Mahendra Dhoni in the 13th over but dragged his throw well wide when he had far more time than he realised.

It was third time lucky for Morgan when he executed a smart run-out of Raina for 26 but it was too little, too late for England, Dhoni leading India home in the 18th over.