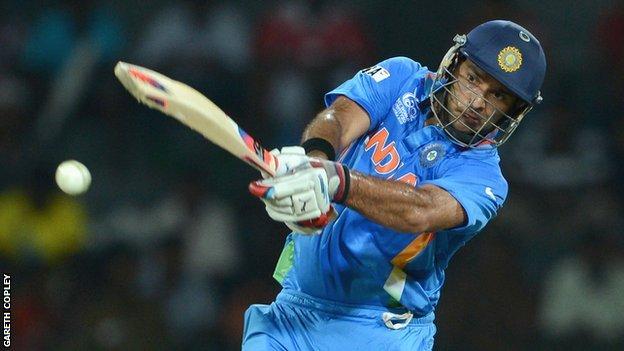 India captain Mahendra Dhoni praised the performance of Yuvraj Singh after the all-rounder led his side to a five-wicket win over England in the first Twenty20 international in Pune.

Yuvraj took 3-19 from his four overs and top-scored for the hosts with 38 from 21 deliveries.

"Yuvraj was brilliant. He bowled really well at the right pace," said Dhoni.

"And he made sure the batsmen coming in after him did not have too much work to do."

Dhoni added: "The way Alex Hales started [the England opener scored 56 from 35 balls], the pressure was on the bowlers.

"So it was important that from the eighth over onwards we brought the team back into game, once the ball became slightly old."

England captain Eoin Morgan said: "We lacked a bit of discipline with our batting, ended up 15 or 20 runs short, and we didn't get the early wickets.

"But we have a young side and the guys showed a lot of promise tonight. We have to pick ourselves up for Saturday."

The second and final game of the series takes place in Mumbai.