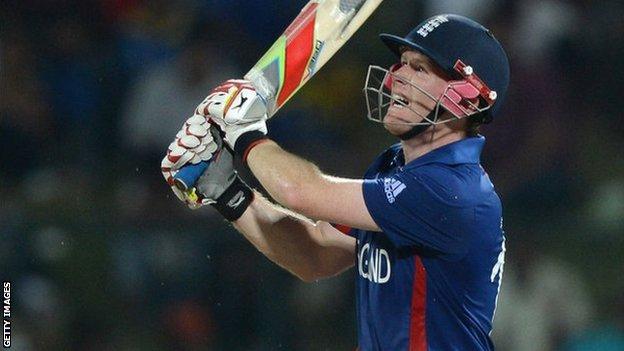 Eoin Morgan hit a six off the final ball as England squared the two-match Twenty20 series against India with a dramatic six-wicket victory in Mumbai.

The hosts, asked to bat first, made the most of some wayward bowling to post 177-8 as Virat Kohli top-scored with a dashing 38.

In reply, Michael Lumb scored 50 and Alex Hales 42 before Yuvraj Singh put the brakes on with 3-17.

But captain Morgan (49 not out) and Jos Buttler (15 not out) led England home.

It was England's highest successful run chase in Twenty20 internationals and scuppered India's hopes of usurping Sri Lanka at the top of the International Cricket Council rankings.

Jade Dernbach made the breakthrough in the second over of the India innings when Ajinkya Rahane advanced down the pitch and sliced to debutant Joe Root, in for Danny Briggs, at third man.

India had to wait until the fourth over for their first boundary when Kohli whipped through mid-wicket and cut through point off successive Dernbach deliveries.

But Stuart Meaker's entry into the England attack sparked India into life. The Surrey fast bowler's first over went for 15, including five leg-side wides, and Luke Wright's first over cost 20 as the imperious Kohli unveiled shots all round the wicket.

Gautam Gambhir fell for a watchful 17, top-edging Wright to Tim Bresnan at third man, and by the middle overs the tourists had wormed their way into the contest.

Rohit Sharma came out playing shots, including a magnificent drive over mid-off, before James Tredwell bowled him for 24.

With Sharma gone, Suresh Raina took the reins, hitting Meaker for three fours and a six in his final over.

Dhoni joined in the fun, smashing Dernbach for two sixes in an over, before perishing for 38 when he mistimed a pull off Bresnan to Samit Patel at mid-wicket.

In the final over, Ravichandran Ashwin fell to Dernbach and Piyush Chawla was run out from the final ball, but the hosts' total was more than respectable.

Opener Lumb got England off to a flyer, although he must have been relieved he was spared an early trial by spin, given his hesitance against the slower ball.

He hit Parvinder Awana for a four and a six in his first over and it got worse for Awana when he dropped a sitter on the mid-wicket boundary offered by Hales.

England's opening pair, aided by some typically indifferent fielding from India, rattled along at almost 10 an over as Lumb reached his first Twenty20 international fifty from 32 balls.

Yuvraj, introduced in the ninth over, had Lumb stumped off his second delivery, and trapped Wright lbw for five before Morgan and Hales set about building a restorative partnership of 29.

Patel was nearly out first ball as Chawla was unable to take a difficult catch running round at deep backward square-leg, but he fell for nine when he skied Dinda to Gambhir at mid-wicket.

England needed 29 to win from 13 balls, which became 23 from 12 when Morgan hit Dinda for six over wide long-on.

Buttler then struck a four and a six from the penultimate over from Awana, the second boundary a majestic straight drive that left England needing nine to win from six balls.

Morgan and Buttler could manage only six from the first five balls of Dinda's final over before the bowler pulled out of his final delivery, with Morgan stepping across his stumps.

Dhoni called his players in for an extended conference but Morgan remained unfazed, hitting Dinda straight over his head as England won the first Twenty20 international to be held at the Wankhede Stadium.

England return to India in January for five one-day internationals.

103 comments
Back to top
unknown