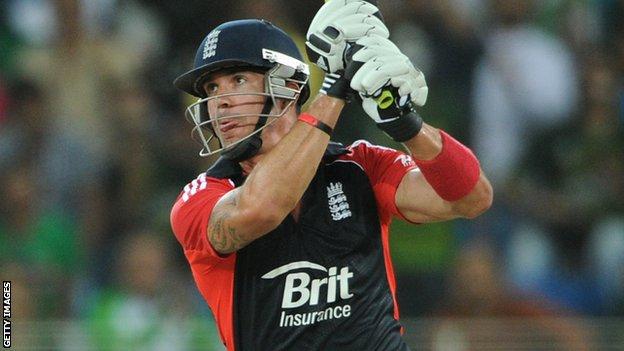 Kevin Pietersen has not been named in England's one-day and Twenty20 squads for the upcoming tour of New Zealand.

Pietersen, 32, has been left out by the national selectors as they look to better manage the workload of players.

James Anderson, Jonathan Trott and Graeme Swann return to the side after being rested for the ODI tour of India.

Stuart Broad is back to captain the Twenty20 team after a recent heel injury, while Joe Root will skipper the second-string Lions side in Australia.

Spinner Swann, rested from both limited-overs series against India, also misses the T20s in New Zealand.

National selector, Geoff Miller, said: "Following on from the ODI tour to India, the tour to New Zealand will require players to adapt to different conditions and will prove a real challenge for the squad as we look to continue the progress we have made in limited-overs cricket.

"There are a number of players who we have decided not to select for parts of the competitive programme this winter as we look to manage their workloads effectively while ensuring we remain competitive across all formats.

"We feel this is the best way of keeping players as physically and mentally fresh as possible during a demanding 2013 and beyond."

The tourists will fly straight to New Zealand after their one-day series in India concludes at the end of January.

Recently appointed limited-overs coach Ashley Giles will pick from a 14-man T20 squad and a 14-man ODI squad for the three Twenty20 internationals and three ODIs against the Kiwis.

Broad and fellow paceman Steven Finn, who missed the end of the Test series and the T20s in India with injury after originally being named in the squad, will be in both squads down under.

In the ODI squad, spinner Danny Briggs and pacemen Jade Dernbach, Stuart Meaker and Chris Woakes join Pietersen in making way from the players selected to face India, although Briggs, Dernbach and Meaker are in the T20 squad.

After two warm-up games in Whangarei, the first T20 match takes place in Auckland on 9 February.

England will also play three Tests in New Zealand, starting with the opening match on 6-10 March in Dunedin.

The England Lions will play a five-match one-day series against Australia A at the same time, with the side led by Root who impressed in the final Test against India this month.

Root, who made his Twenty20 international debut in Mumbai on Saturday but was not required to bat or bowl, misses out on the full squads, as does uncapped seamer James Harris who was another late call-up to the T20 squad in India but did not feature.