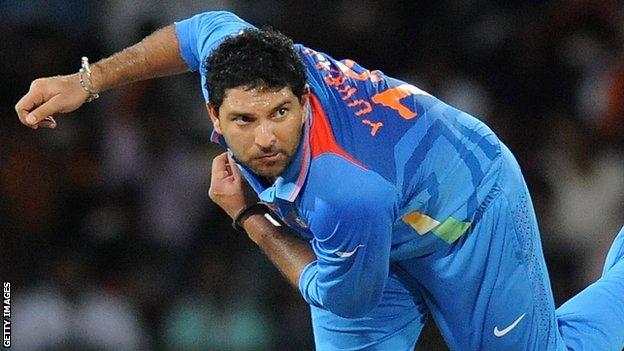 India all-rounder Yuvraj Singh praised Eoin Morgan after the stand-in England captain hit the last ball of the match for six to seal a six-wicket win and draw the Twenty20 series 1-1.

"The way he finished the game was incredible," said Yuvraj, who took 3-17 and was named man of the series.

"We bowled well in patches but England batted well, especially Morgan, who is a great finisher."

Morgan added: "It was a hell of a game of cricket; we just got over the line."

Set 179 to win at the Wankhede Stadium, England needed three off the last ball with Morgan on strike.

Although Ashok Dinda pulled out of his final delivery as Morgan shaped to hit to leg, the seamer was then dispatched back over his head in glorious fashion.

Deputising for the injured Stuart Broad, Morgan's unbeaten 49 from 26 balls earned him the man of the match award.

He and Jos Buttler shared a decisive unbroken stand of 32 to seal a thrilling victory, Michael Lumb and Alex Hales having made 50 and 42 respectively at the top of the order.

"It was a great pitch and both sides were in the game throughout the whole 40 overs," said Morgan.

"The stats suggest at this stadium that the chasing team predominantly wins. We looked at that and backed ourselves to chase.

"But our fielding was outstanding. We have looked at how we can get ahead of the game, and we saved at least 10 or 15 runs today.

"This was one of the best atmospheres I've played in, and this will do all our young players lots of good for the future."

Reflecting on the conditions under floodlights which made it difficult for his spinners to grip the ball, India captain Mahendra Dhoni admitted: "Dew really changes the game, but we were short [of runs] at the start and we can't blame the dew for that.

"Our fast bowlers are still a bit raw; they will get a lot of experience from this and there's plenty of room for improvement.

"Ashok Dinda and Parvinder Awana are great prospects for us - we have to back them."

Samit Patel earned an England increment contract for 2012-13 after appearing in the match.

The international was the Nottinghamshire all-rounder's third in the format for England this year which, coupled with his appearances in the first three Tests against the same opposition, took him past the 20-point threshold to earn a deal.