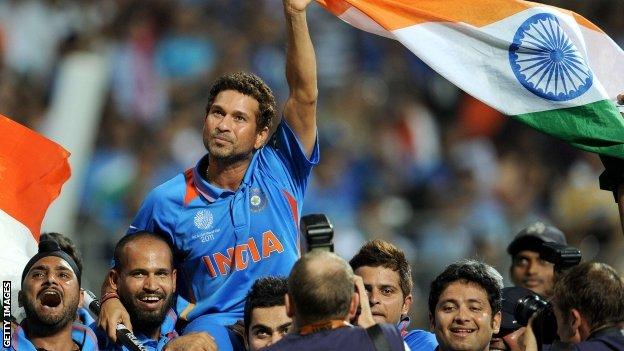 In a statement, the 39-year-old said: "I feel blessed to have fulfilled the dream of being part of a World Cup-winning Indian team."

His last one-day international game was in the Asia Cup on 18 March, in which he scored 52 in a six-wicket win against Pakistan.

His form has dipped in recent years, however, and his average in one-day cricket in 2012 fell to 31.5, a figure that was boosted by a knock of 114 in his penultimate innings against lesser lights Bangladesh which was his 100th on the international stage.

Tendulkar added: "The preparatory process to defend the World Cup in 2015 should begin early and in right earnest. I would like to wish the team all the very best for the future.

"I am eternally grateful to all my well-wishers for their unconditional support and love over the years."

Tendulkar, who made himself unavailable for India's Twenty20 matches after playing just one game in 2006, has faced calls to retire from all international competition from former national captain Sourav Ganguly after several poor performances with the bat in the recent Test series against England.

Tendulkar's 23-year ODI career, which began with ducks in his first two appearances, included his becoming the first batsman to score a double century in that form of the game against South Africa two years ago, while he was the top scorer in the 2003 World Cup where India were losing finalists.

He then excelled in India's successful 2011 World Cup campaign, scoring two centuries and averaging 48.2 in the tournament as co-hosts India won the final in his home city of Mumbai against Sri Lanka.

India spinner Harbhajan Singh saluted his colleague on Twitter: "Sachin Tendulkar, a great batsman. Great human being. A great friend. Great man to look up to. Proud Indian. Real son of India. I salute you and love you."