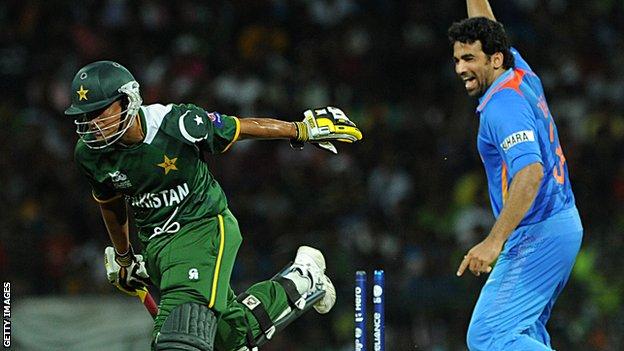 India have left veteran left-arm seamer Zaheer Khan out of their forthcoming Twenty20 and one-day international series against Pakistan.

Sachin Tendulkar has retired from the 50-over format, but fellow batsman Virender Sehwag retains his ODI place.

The Twenty20 squad is largely unchanged from the recent series against England.

The first bilateral series between the two countries since 2007, comprising two T20 matches and three ODIs, begins with a T20 game on Christmas Day,

Zaheer was dropped midway through the recent Test series against England, while destructive opener Sehwag's place had also been under threat after he only averaged 23.66 from nine ODIs in 2012.

All-rounder Bhuvneshwar Kumar, who is in both squads, seamer Shami Ahmed, who is in the 50-over party, and batsman Ambati Rayudu who is in the T20 squad, are uncapped in any international format.

In other changes from India's last ODI series, against Sri Lanka in July and August, seamer Ishant Sharma, leg-spinner Amit Mishra and fit-again all-rounder Yuvraj Singh - man of the T20 series against England - return to the 50-over squad.

Pakistan named their squads a fortnight ago, with former captains Shahid Afridi and Shoaib Malik left out of the ODI squad, though they remain in the Twenty20 party, and there were recalls for pace bowlers Umar Gul and Junaid Khan.