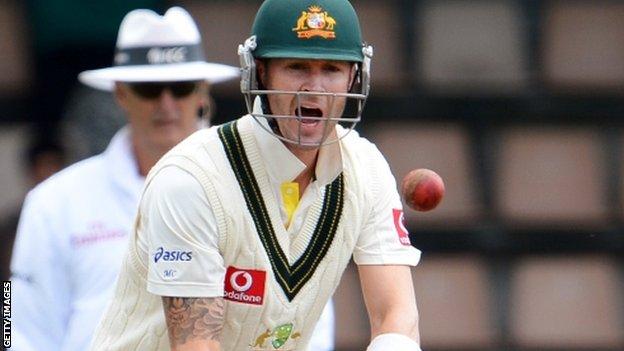 Australia captain Michael Clarke is doubtful for the traditional Boxing Day Test because of a hamstring injury.

If Clarke is not passed fit to face Sri Lanka, all-rounder Shane Watson will lead the Test side for the first time, with batsman Usman Khawaja standing by to replace Clarke in the middle order.

As several pacemen are ruled out with injuries, uncapped right-arm seamer Jackson Bird will make his Test debut.

Bird, 26, gets his chance as left-armer Mitchell Starc is rested.

He will play in a three-strong seam attack along with Mitchell Johnson and Peter Siddle as Starc, Ben Hilfenhaus, John Hastings, Josh Hazlewood, James Pattinson, Ryan Harris and Pat Cummins are all unavailable because of injury.

But Clarke will be given as much time as possible to prove his fitness, as coach Mickey Arthur says he is "clearly improving".

The skipper's hamstring problem surfaced during the first Test in Hobart, which Australia won by 137 runs.

But Arthur said: "If I was a betting man I'd bet on Michael leading the team out on Boxing Day. It will be a consultation between Michael and [physio] Alex Kountouris."

On debutant Bird, he added: "We've got a lot of faith in Jackson.

"At the start of the summer we had a list of bowlers that we wanted to keep fresh and ready to go and Jackson was one of them, for the simple reason that he brings everything that we want... pace, swing and consistency.

"We've got no issues about throwing the new ball to him.

"Mitch [Starc] is clearly disappointed, but he's our one quick bowler that plays in all three forms of the game.

"Hopefully he misses one Test to make sure we don't have another injury."