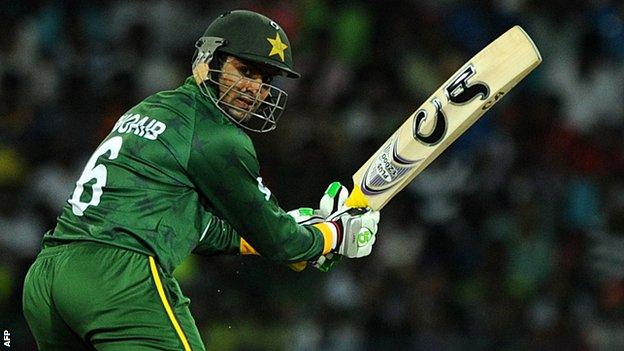 Pakistan recovered superbly to edge out India by five wickets in a thrilling first Twenty20 international.

Chasing India's modest 133-9 in Bangalore, the visitors recovered from 12-3 and appeared to be cruising to victory before a late wobble resulted in them needing 10 from the final over.

But Shoaib Malik (57 from 50 balls) clobbered a straight six to see Pakistan home with two balls to spare.

This is the first bilateral series between the countries for five years.

After bowling well to restrict India to a below-par total, Pakistan's chances of a first Twenty20 victory over their hosts appeared slim when debutant seamer Bhuvneshwar Kumar (3-9) ripped through their top order.

But a fine 116-run partnership between Malik and his captain Mohammad Hafeez (61) put them firmly in control.

When Hafeez, whose 44-ball knock included a pair of sixes and six fours, fell with the score on 118-4, Pakistan were in the driving seat, needing 16 from 17 balls.

But some tight bowling added to Pakistani nerves, and they were left needing six from Ravindra Jadeja's final three deliveries.

Rather than playing conservatively, though, Malik slogged the slow left-armer down the ground to stun the majority of the otherwise noisy 36,000 home fans, who had earlier watched their batsmen fail to capitalise on an excellent start after being asked to bat first by Pakistan.

India put on 77 for the opening wicket, as Gautam Gambhir (43) and Ajinkya Rahane (42) appeared to be laying the foundations for a big total.

But not for the first time this winter, India suffered a major batting collapse, losing nine wickets for only 47 runs in the next 7.3 overs as Umar Gul (3-21) and Saeed Ajmal (2-25) did the main damage.

Pakistan's optimism did not last long though as Kumar dismissed Nasir Jamshed in his first over and then accounted for Ahmed Shehzad and Umar Akmal in his second.

But Malik and Hafeez then steadied the ship before the former - who was fortunate to be reprieved when caught off a no-ball called because it was above shoulder height - went on to club the winning runs.