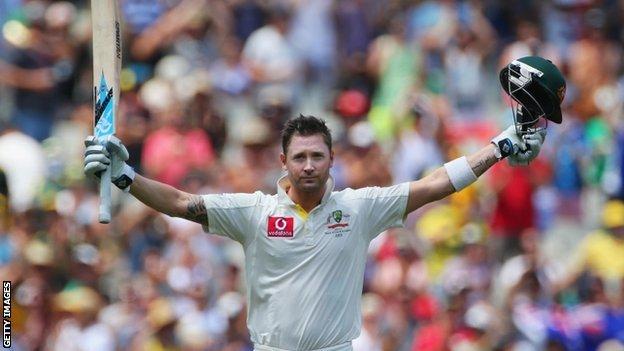 Australia captain Michael Clarke became his country's highest run scorer in a calendar year after making 106 on day two of the second Test against Sri Lanka in Melbourne.

It was Clarke's 22nd Test century, but his first at the MCG.

"It's always nice to make runs and even nicer to make a century for Australia," he said.

Top Australian batsmen with most runs in a calendar year

Clarke, who had been a doubt for the match with a hamstring problem, reached the milestone when he got to 56 shortly before lunch, and admitted he was honoured to beat his recently retired compatriot's mark.

"To me, Ricky Ponting is one of the all-time great players Australia's ever had, so to beat Ricky at something is a fantastic achievement. I'm very proud," Clarke added.

"Numbers have never really bothered me too much. It's nice to be making runs and leading by example as one of the leaders in the team and the captain of the team, I think it's really important that the captain is doing that.

"But to me it's about winning games. If I am helping this team have success then I feel like that's part of my job. As long as we keep winning that's my priority."

The home side, who won the opening Test earlier this month, survived a middle-order collapse to be 440-8 at close of play - a lead of 284.

Clarke and Watson shared a 194-run partnership until Clarke edged Shaminda Eranga, bowling with the new ball, to Mahela Jayawardene at third slip.

Watson fell for 83 in the next over when he hooked Dhammika Prasad to Thilan Samaraweera at deep square-leg, before Matthew Wade became Prasad's third victim.

"The boys played really well today," added Clarke. "Shane Watson was outstanding; Mitchell Johnson was really good at the back end of the day."