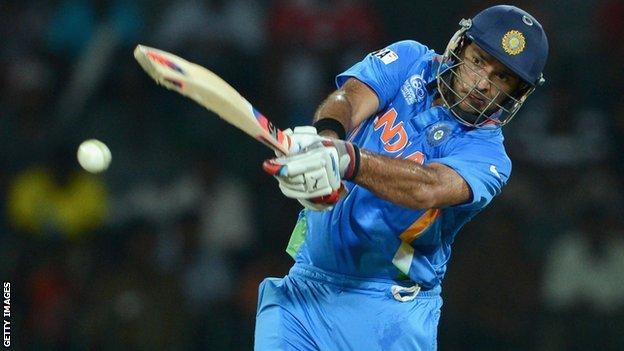 Yuvraj Singh smashed 72 to give India a series-levelling 11-run win over Pakistan in the second Twenty20 international in Ahmedabad.

The left-hander hammered seven sixes in his 36-ball effort, with Mahendra Dhoni making 33 to take India to 192-5.

A three-match one-day international series begins in Chennai on Sunday.

After his side won the series opener by five wickets, Hafeez won the toss and invited the home side to bat.

India openers Gautam Gambhir and Ajinkya Rahane shared 44 before both fell to Umar Gul (4-37), with Virat Kohli making a steady 27 until being run out by Saeed Ajmal.

That saw Dhoni join irrepressible left-hander Yuvraj, who plundered two maximums off Sohail Tanvir and took three more off Ajmal's next over before eventually holing out off Gul to end a partnership of 97.

Pakistan started their chase with confidence as openers Jamshed and Ahmed Shehzad added a stand of 74 that was ended when the former was removed by Ravichandran Ashwin.

Shehzad followed, stumped off the spin of Yuvraj, but Hafeez altered the momentum, striking two sixes off successive Ashwin deliveries.

However, paceman Dinda made a decisive intervention late in the innings, accounting for Hafeez and both Kamran and Umar Akmal to ensure Pakistan fell short.