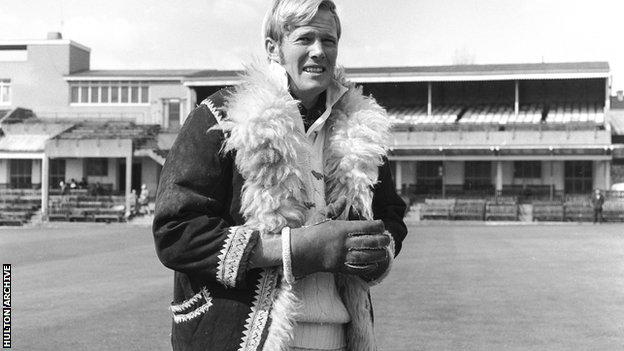 Tony Greig, who has died aged 66, was one of cricket's pioneers and innovators.

An immense and competitive character, he was also someone who stood up for what he believed was right and was not afraid to take people on.

He did not set out to offend people but could court controversy on and off the field of play.

The clash with West Indies batsmen Alvin Kallicharran in 1974 stands out. For those unfamiliar with what happened, it was similar to the incident involving Ian Bell when England played India in 2011.

At the end of day two of the first Test between England and West Indies in Port of Spain, non-striker Kallicharran, who was unbeaten on 142, began to walk off after the final ball was bowled, assuming time had been called and it was close of play.

However, Tony, seeing Kallicharran out of his ground, had other ideas. He threw down the stumps at the non-striker's end, prompting uproar in the crowd when Kallicharran was given out.

Tony was involved in more controversy in 1976, when he said he would make Clive Lloyd's West Indies side "grovel" during their three-Test series in England.

Tony knew at the time he had made a mistake, but his words were seized upon amid suggestions of racist undertones.

I was there at The Oval that summer as a 16-year-old boy when, in the wake of England's 3-0 defeat by a team that included the likes of Andy Roberts, Viv Richards and Michael Holding, Tony dropped to his knees in mocking reference to his own comments. A lot of West Indians loved him for that. Tony was certainly a showman.

Many people also remember Greig for his association with World Series Cricket in the late 1970s.

Media mogul Kerry Packer wanted to stage floodlit cricket and promised more money for the game, his Channel Nine station offering up to 10 times what the Australian Broadcasting Corporation paid to screen matches at the time.

The Australian Cricket Board kept saying "no", but Tony, who was England captain at the time, led a rebel breakaway.

The decision to join Packer's set-up was seen as the ultimate betrayal. Indeed, the infamous episode tore cricket apart for a while.

I remember going to a Professional Cricketers' Association meeting at Edgbaston at the time. It was a very heated meeting, but it soon became clear that generations would benefit from the additional money being created by the sudden hike in the cost of television broadcasting rights.

Channel Nine helped revolutionise cricket, marketing the game in a way it never had been before. It should not be forgotten that Tony had a huge part to play in that.

When he came to deliver his Cowdrey Lecture at Lord's in June this year, Tony's brother-in-law, MCC president Phillip Hodson, pointed out that the first draft contained no reference to the World Series Cricket furore, a subject on which a lot of the MCC still felt very strongly.

But Tony did not duck the issue when it came for him to speak and had cleared the air with many disgruntled MCC members by the end of the lecture. Albeit grudgingly in some cases, most people eventually accepted that Packer's revolution had to happen.

The only person he did not get the chance to make peace with was traditionalist and cricket writer EW "Jim" Swanton, who died in 2000. I know Tony was very upset he was unable to do that.

A proud South African who qualified to play for England through his Scottish parents, Tony was a huge man to have on your side and someone you would run through a brick wall for, because you knew he would do the same for you.

People also forget he was one of the best all-rounders England ever had, averaging 40 with the bat at a time when that was far less common than currently. He was also a very useful bowler, with either his medium pace or his off-cutters, and a fearless close fielder.

He was always on the go in life, too: looking for ways to improve cricket whether on the field or off. Who can forget the sight of him wheeling out the weather maps and all those other innovations during his time as a commentator with Channel Nine?

I remember coming back from holiday in Dubai to a message from Tony booming out of my answer machine. "Hi Aggers! I'm down to do the final in Sharjah but I'm in Australia for a wedding so I've told them you'll do the commentary!" I had only just returned from there but because Tony had asked me, I went back out.

He was a bit like our own Test Match Special commentator Henry Blofeld - there was always something going on whenever he was around.

And whether playing or commentating, Tony viewed every ball of a cricket match as an event.