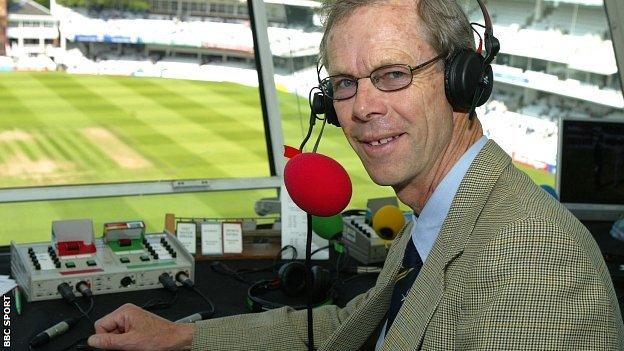 Test Match Special commentator Christopher Martin-Jenkins has died of cancer at the age of 67.

Martin-Jenkins joined the BBC in 1970 and commentated on his first match, a one-day international, in 1972.

He was diagnosed with cancer in January 2012, shortly after returning from commentating duties in the United Arab Emirates.

Martin-Jenkins' Test Match Special colleague and friend, current BBC cricket correspondent Jonathan Agnew, was among those who paid tribute to the journalist.

"CMJ, as he was widely known, was one of cricket's most respected writers and broadcasters," said Agnew.

CMJ was one of the voices of the English summer

"With modern media now preferring the views and experiences of former Test match cricketers, Christopher's authority and respect was not gained from a high-profile playing career, but a deep-rooted love of the game linked to a strong protective instinct which helped him earn the most coveted position of president of the MCC [Marylebone Cricket Club].

"Listeners to Test Match Special were all too familiar with CMJ's eccentricities - like going to the wrong ground for the start of a Test match. His legendary, chaotic time-keeping was very much part of his charm.

"Considering the years he worked as editor of The Cricketer magazine, and as correspondent for the BBC twice, the Daily Telegraph and the Times, and 40 years commentating on Test Match Special and the many books he wrote, it is doubtful that anyone has contributed more in a lifetime to the overall coverage of cricket than Christopher Martin-Jenkins."

A statement from his family said: "Christopher died peacefully at home this morning after his brave resistance to cancer. The family is extremely proud of all that he did to pass on his love of cricket worldwide with his gift of communicating through the spoken and written word.

"He was above all a much loved husband, brother, father and grandfather."

Former England captain Sir Ian Botham tweeted: "Very sad to hear of the death of the 'Major', Christopher Martin-Jenkins. Our thoughts are with the family. A true Gentleman."

Test Match Special producer Adam Mountford said: "CMJ was one of the voices of the English summer - a true gentleman who embraced the changes in cricket whilst acting as a guardian of its traditions and values.

"Quite simply he will be remembered as one of the legendary characters of cricket writing and broadcasting. The thoughts of all of us on TMS are with Judy and his family."

ECB chief executive David Collier said Martin-Jenkins was a "cricketing institution" who would be "hugely missed by all cricket fans as well as his many friends and colleagues within the game".

While ECB chairman Giles Clarke added: "It was always a privilege and a pleasure to be in his company and share discussions with him about our great game. He was man of great personal integrity, a true gentleman and our thoughts today are with his family and his close friends."

President of the MCC Mike Griffith said he had known Martin-Jenkins since his schooldays at Marlborough College and they had become good friends.

"CMJ will be sorely missed. As a commentator and journalist he was passionate about upholding the values of the game and always expressed his views with clarity and humour," he said.

"Everyone at MCC shares the sadness now being felt by the cricketing world that his live commentaries will never be heard again."

Martin-Jenkins was a useful schoolboy cricketer for Marlborough and also played for Surrey's second XI.

His journalistic talents were encouraged by the legendary EW Swanton and he joined the Cricketer magazine as his assistant editor.

His son Robin played county cricket for Sussex before retiring in 2010.