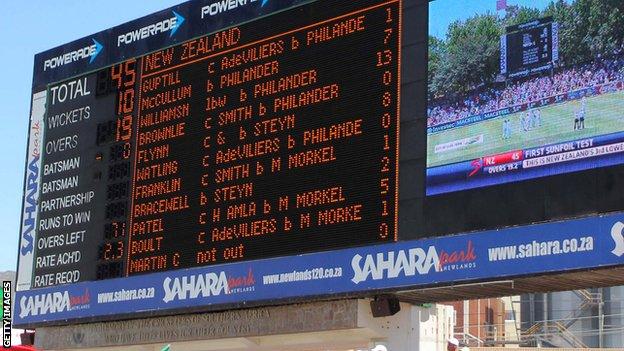 New Zealand were dismissed for 45 - the lowest Test score in almost 39 years - by South Africa on Wednesday.

Kane Williamson was the only player to reach double figures in New Zealand's first innings on day one of the first Test in Cape Town as pace bowler Vernon Philander took 5-7.

The total was the third lowest ever scored by New Zealand.

Later in the day, Jacques Kallis became the fourth batsman to reach 13,000 Test runs as South Africa finished on 252-3.

Opener Alviro Petersen was unbeaten on 103 at the close.

After New Zealand had won the toss, Morne Morkel took 3-14 while Dale Steyn (2-18) became the joint third fastest bowler to 300 Test wickets, earning a standing ovation when he knocked Doug Bracewell's off stump over.

Steyn was the fourth South African to 300 wickets after Allan Donald, Shaun Pollock and Makhaya Ntini, and matched the 61 Tests it took Sir Richard Hadlee and Malcolm Marshall to reach 300 wickets.

Only Dennis Lillee (56) and Muttiah Muralitharan (58) were quicker to 300 wickets, while Shane Warne took 63 Tests.

India were the last team to post a lower total, when they scored 42 against England at Lord's in June 1974.

It is not the first time South Africa have skittled a side for less than 50 in Cape Town in recent years.

In November 2011, they dismissed Australia for only 47 in their second innings - having had them 21-9 - in a Test they won by eight wickets.

After two Tests and three one-day internationals in South Africa, New Zealand will then host England in three Twenty20 matches, three ODIs and three Tests, the first of which starts on 6 March.