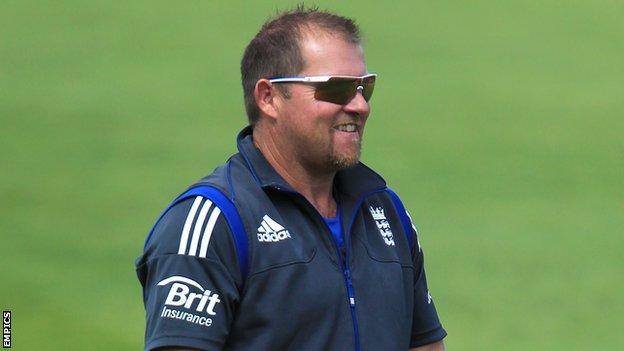 England bowling coach David Saker says he has turned down the director of cricket role at Warwickshire.

The county champions had been expected to appoint from within following Ashley Giles's end-of-season resignation to become England's limited-overs coach.

The Bears spoke to Saker, although they have denied offering him the job.

"I had talks with Warwickshire and it was certainly an attractive offer they made. But it has come a little too early for me," Saker told the Guardian.

"I have unfinished business with the England team and I would like to take that through at least until the end of the 2015 World Cup."

However, Warwickshire chairman Norman Gascoigne dismissed 46-year-old Saker's claims that he was offered the post, telling the Daily Telegraph: "In the light of press speculation that was going around we contacted David to clarify the situation with him and ask whether he wanted to apply or not.

"He came back to us and said that the timing was not right for him and that he intended to continue with England.

"That is as far as it went. I can categorically say that at no stage did we offer him the job."

Australian Saker, who left his role with his state side Victoria to become England bowling coach in April 2010, is scheduled to link up with the rest of the England tour party on Thursday for the forthcoming one-day series against India, followed by the two-month tour to New Zealand.

Warwickshire's deadline for the vacancy created by Giles's departure closed before Christmas, but they had already announced they would not make any announcement until January.

The players have been back in pre-season training since the end of November and will remain under the charge of Giles' two former assistants, ex-England and Scotland one-day international Dougie Brown and Graeme Welch, the Bears' highly regarded bowling coach, both of whom have applied for the job.

One surprise contender for the vacancy is understood to be former Bears batsman David Hemp.

A Warwickshire spokesman told BBC West Midlands Sport that they would "not be making any further comment at this stage".