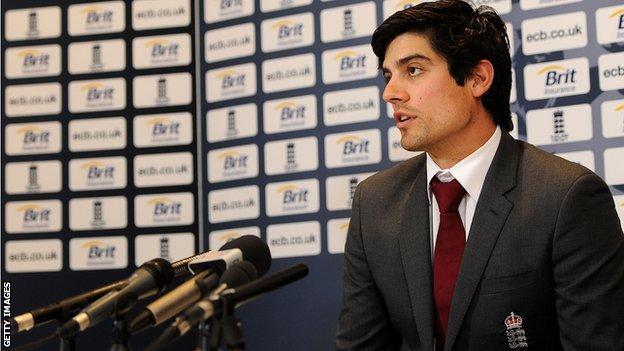 England fly out for the five-match one-day series without James Anderson, Graeme Swann and Jonathan Trott.

Kevin Pietersen returns for the first time since retiring from one-day internationals in May, but will miss February's one-dayers in New Zealand.

"We are looking at workloads," said Cook. "The rotation of certain players at certain times will benefit England."

The England skipper added: "We have to look after every player, KP is no different."

The move has been introduced to help team director Andy Flower cope with the demands of an ever-increasing international fixture list.

Giles has taken over control of the one-day international and Twenty20 sides from Flower, allowing him to focus on the Test team and 2013's home and away Ashes series against Australia.

Cook believes it is a positive step, comparing it to when the team had three captains for the three different forms of the game - Andrew Strauss in Tests, Cook in 50-over cricket and Stuart Broad in charge for the Twenty20 format.

"This is unknown territory," admitted Cook. "We haven't done it before. It is a bit like the three captains.

"That was new and I thought it worked really well because of the energy the captains brought to their side.

"I can see this working the same way on the coaching side.

They begin their tour with two warm-up games on Sunday and Tuesday, before they face India in the first one-day international in Rajkot on 11 January.