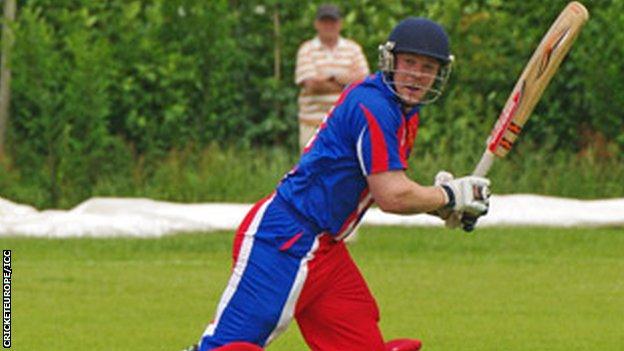 Jersey batsman Dan Garton could be out of action for up to two months after breaking his arm in two places in a freak training accident.

Garton tripped and fell into a wall during a Christmas fitness session.

"They were doing some running drills in the hall and as he approached the wall he stumbled and ran into it," the Jersey Cricket Board's Chris Minty told BBC South West Sport.

"It will be six to eight weeks until the plaster comes off."

But it is unlikely that the 19-year-old's injury will keep him out for Jersey's summer campaign.

"He should be fit for the season," Minty said.

"The sessions went very well despite that set back.

"We're used to dealing with injuries, it's part and parcel of the set up."

Jersey had held a two-day fitness camp for their players over the festive period as part of their preparations for the summer tournament.

"The fitness work is an ongoing exercise," Minty said.

"We are working hard to be as professional as we can, both on and off the field, and setting this exercise up is part of that plan."