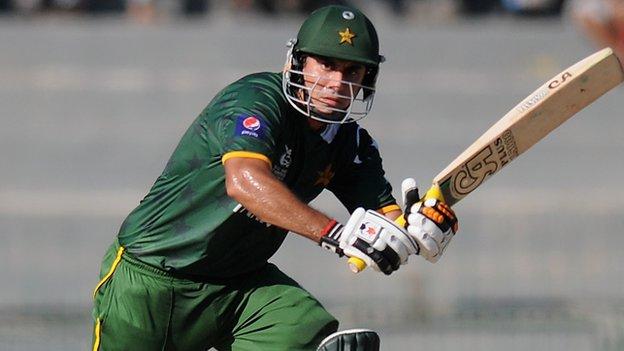 Opener Nasir Jamshed struck his second successive century to help Pakistan to an 85-run win over India in the second one-day international in Kolkata.

The win gives them an unassailable 2-0 lead in the three-match ODI series.

After India won the toss, Jamshed (106) and Mohammad Hafeez (74) shared an opening stand of 141, before the visitors were bowled out for 250.

The hosts struggled in reply, and captain Mahendra Dhoni was 54 not out when they were dismissed for 165.

Paceman Junaid Khan (3-39) and spinner Saeed Ajmal (3-20) were the pick of the Pakistan bowlers at Eden Gardens.

Jamshed, 23, was following up the 101 he made in the series-opening six-wicket win in Chennai and his partnership with Hafeez lasted until the 24th over when Hafeez missed while trying to sweep left-arm spinner Ravindra Jadeja and was bowled.

After surviving a run-out appeal in the 38th over, Jamshed reached his century in the 40th with a driven four off Ravichandran Ashwin over mid-off.

His innings, which included 12 fours and two sixes, ended when he advanced down the pitch to Jadeja but was stumped by Dhoni to leave his team on 210-5.

India's openers added 42 in 11 overs before Gautam Gambhir was bowled by left-armer Junaid, and the rapid departures of Virat Kohli and Sehwag left them 59-3 in the 15th over.

The hosts took until the 29th over to reach three figures and had already lost five wickets by then, before skipper Dhoni showed some late resistance, having been dropped Shoaib Malik at long-on off Mohammad Irfan.

A defeat by more than 100 runs looked on the cards when Ajmal trapped Bhuvneshwar Kumar and Ashok Dinda lbw without scoring in the 40th over to leave India 132-9.

However, Dhoni reached his 47th ODI fifty in an unlikely last-wicket stand of 33 - the second highest of the innings - with last man Sharma, who faced 35 balls for his two runs before being bowled by the returning Junaid with two overs remaining.

The final match takes place in Delhi on Sunday, wihen India will look to avoid a humiliating 3-0 whitewash.