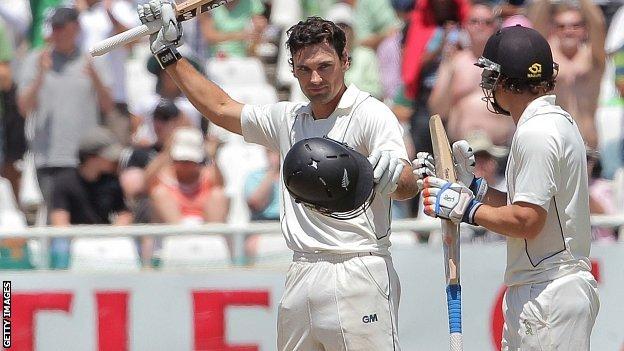 South Africa beat New Zealand by an innings and 27 runs on the third day of the first Test at Newlands.

The hosts dismissed the Kiwis for 275 shortly before tea after Dean Brownlie hit 109, his maiden Test century.

New Zealand resumed day three on 169-4, with Brownlie on 69, but lost their last six wickets for 46 runs.

South Africa dismissed the visitors for 45 in the first innings and then declared on 347-8 after lunch on the second day in Cape Town.

Brownlie, whose previous highest Test score was 77 not out against Australia in Brisbane in 2011-12, reached his 100 off 160 balls courtesy of a six off left-arm spinner Robin Peterson.

The Australian-born Brownlie, 28, was eventually caught by Peterson at deep backward point off paceman Morne Morkel after facing 186 balls.

After two Tests and three one-day internationals in South Africa, New Zealand will host England in three Twenty20 matches, three ODIs and three Tests, the first of which starts on 6 March.