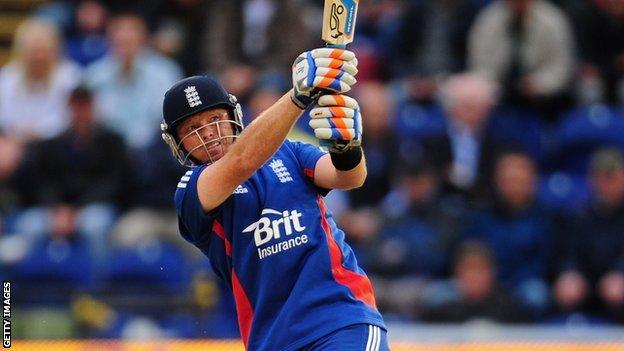 England fell to an emphatic 53-run defeat against India A in the opening match of their one-day tour.

The tourists, who were missing captain Alastair Cook because of a cold, have a second warm-up match on Tuesday.

A very rusty batting display gave England an inauspicious start to this double Ashes year. It may only have been a warm-up match (albeit one played in very cold and foggy conditions) but England's shot selection was often poor as they slumped from 32-0 to 72-6. Ian Bell's run-a-ball 91 was the bright spot, and England's defeat would have been heavier if Jade Dernbach hadn't taken 2-23 from his 7 overs. His bowling was versatile and economical in the closing overs to keep the target down, but Bresnan, Finn and Woakes were all wicketless and much more expensive.

England, led by limited-overs coach Ashley Giles for the first time, looked in good shape after reaching 32-0, but then lost Kevin Pietersen for 19 to the penultimate ball of the seventh over.

Tim Bresnan (22) offered some resistance but Bell, who was dropped on 16 and 35, was left with too much to do and was out just short of his century when he top-edged Mohit Sharma and was caught behind.

England chose Buttler ahead of Joe Root as they prepare for the five-match one-day series starting on Friday.

After a delayed start due to cold conditions and low-lying fog, the game was interrupted by bad light for over an hour.

When play resumed openers Vijay and Abhinav Mukund extended their stand to 118 before James Tredwell took the first wicket, having captain Mukund stumped for 57.

Vijay lifted Tredwell for a straight six and a reverse-swept four, but was bowled by a quicker delivery from Patel for 76.

Ashok Menaria hit successive maximums off the England all-rounder before departing for 17 when he mistimed a pull off Jade Dernbach's bowling.

Dernbach also saw off Jalaj Sexena, but Kedar Jadhav scored a tidy 52 not out to help India A to a total that would prove far too challenging.

We are using archive pictures for this match