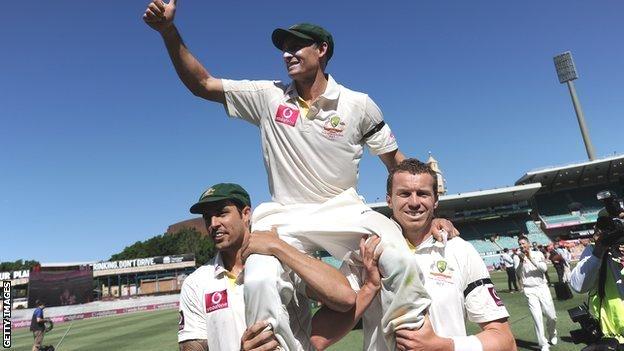 Michael Hussey bowed out of Test cricket on a winning note as Australia beat Sri Lanka by five wickets in Sydney to seal a 3-0 series whitewash.

The 37-year-old made an unbeaten 27 to help Australia overhaul a modest target of 141 on the fourth day at the SCG.

"Had it not been for a very stubborn office manager at the local branch of Australia Post 30 years ago, Mike Hussey might never have picked up a cricket bat, let alone worn the Baggy Green."

The man who made Mr Cricket

Earlier, Sri Lanka were bowled out for 278 after resuming on 225-7, with Dinesh Chandimal making an unbeaten 62.

Seamer Jackson Bird finished with 3-76 - and seven wickets in only his second Test - to claim the match award.

"I couldn't be happier," added Hussey, who began his Test career in 2005 and was afforded a standing ovation when he came out to bat before tea at the SCG.

"I didn't want to bat at all. I was hoping we would get the runs with none down."

Although the hosts lost David Warner without scoring in the second over of their pursuit, victory never looked in doubt against a Sri Lanka side that have now not win a Test in Australia in 14 attempts.

Phil Hughes made a rapid 34 before falling lbw to Rangana Herath, while Tillikaratne Dilshan had captain Michael Clarke taken at short-leg for 29.

By the time Herath accounted for Ed Cowan, who compiled a patient 36, and Matthew Wade, Australia's triumph was all but secured.

With two runs needed to win, Hussey took a single, and the crowd cheered Mitchell Johnson as he appeared to be blocking out the over before Hussey called Johnson through for the winning run to point off Herath.

"We won the series 3-0 and that was our goal against Sri Lanka," said Clarke, whose side play England in back-to-back Ashes series this year.

"We are improving slowly as a group but we know the next 12 months is huge for us."

Clarke, who is struggling with a hamstring injury, has been left out of the one-day squad for the first games of the five-match series against Sri Lanka starting on 11 January.

Hussey, who said he would retire from international cricket at the end of the Australian summer, was also omitted, meaning he is unlikely to play for Australia again.