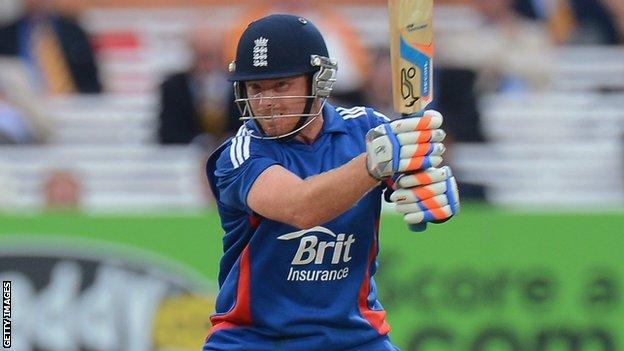 Ian Bell said England's 53-run defeat by India A on Sunday was meaningless as a guide to their chances in the five-match one-day series against India.

England, who have a final warm-up match on Tuesday, lost six wickets for 40 runs in a poor batting display.

"It means nothing going into the series whether you do well or do badly. It really is irrelevant. It's what happens in that first one-day international.

"A very rusty batting display gave England an inauspicious start to this double Ashes year. It may only have been a warm-up match (albeit one played in very cold and foggy conditions) but England's shot selection was often poor as they slumped from 32-0 to 72-6. Ian Bell's run-a-ball 91 was the bright spot, and England's defeat would have been heavier if Jade Dernbach hadn't taken 2-23 from his 7 overs. His bowling was versatile and economical in the closing overs to keep the target down, but Bresnan, Finn and Woakes were all wicketless and much more expensive."

"It's disappointing to lose but credit to India A," said Bell who made 91.

Only Bell, who was dropped twice, managed to make an impact as England were dismissed for 175 from 36 overs.

"Obviously it's disappointing but it's a warm-up game and the one thing this team has done well is not let defeats affect them," added Bell.

"We'll work hard, practise before the next game and work hard in the next practice game.

"You want to be as positive as possible. It wasn't an easy wicket to come down and hit over the top early, it was disappointing to get a couple of those dismissals.

"That happens, we've been here two days. Hopefully that's out of the system now and we can learn from what we've done here and try not to do it again."

England went into the match without captain Alastair Cook, who had a cold, and were led by Eoin Morgan in Ashley Giles' first match as coach of the side.

Cook's absence meant Bell opened with Pietersen, and Warwickshire batsman Bell hopes to keep his place at the top of the order.

"I've enjoyed opening, 100%, it's gone really well in the last three series," said Bell, who was recalled to the 50-over side after Pietersen's self-imposed exile.

"We've got plenty of options but it's something I've really enjoyed and something hopefully I do consistently now.

They face a Delhi XI on Tuesday before facing India in the first international in Rajkot on Friday at 06:30 GMT.

The match will be live on Test Match Special and the BBC Sport website.

We are using archive pictures for this match