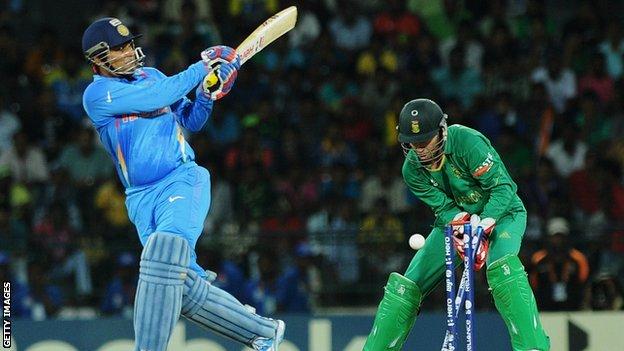 India have come under criticism for recent poor form and for losing 2-1 to rivals Pakistan in their ODI series.

Gautam Gambhir has been retained, while Mahendra Singh Dhoni continues as captain despite some suggestions in the Indian media he should be replaced.

Cheteshwar Pujara, who scored 206 not out against England in the Test series, has been added to the squad.

England recorded a first Test series win in India in 27 years in December and India immediately came under pressure, increasing with the one-day series defeat to Pakistan.

The 34-year old was left out of Sunday's third and final clash against Pakistan and has now been left out by the Indian selectors for the matches against England in Rajkot, Kochi and Ranchi.

Ravinchandran Ashwin and Amit Mishra remain as the frontline spinners, with veteran Harbhajan Singh again missing out. Shami Ahmed is also included after making his debut against Pakistan on Sunday.

Meanwhile, England fell to an emphatic 53-run defeat against India A in Delhi, in the first of two warm-up matches before their five-game one-day series against India begins on Friday.