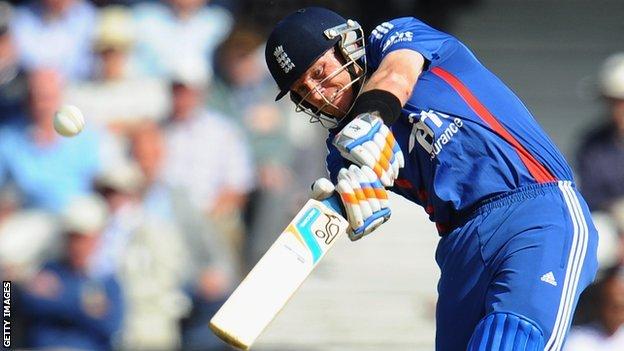 Ian Bell shone for the second match in succession but could not prevent England slipping to a six-wicket defeat in their second warm-up game before the one-day international series in India.

Bell top-scored with 108 and shared in a partnership of 113 with Eoin Morgan in a much improved batting display from the defeat by India A on Sunday.

Alastair Cook's side posted 294-5 but Shikhar Dhawan led the way for Delhi.

The opener scored 110 as the hosts eased home with nine balls remaining.

The first ODI of the five-match series against India is on Friday, January 11 in Rajkot.

England rested Kevin Pietersen, while Cook featured after missing the first match because of illness. Joe Root and Stuart Meaker also came in to the side as Jos Buttler and Tim Bresnan were left out.

"A score of 294-5 should have been sufficient, but England's seamers bowled erratically. Wides and no balls undermined Steve Finn in his first spell, and neither Stuart Meaker nor Chris Woakes carried much threat. James Tredwell took two wickets and exercised genuine control early in his spell, but in truth there was no-one Alastair Cook could totally rely on. At least the batting was a significant improvement on Sunday but the bowling will have to be much sharper in Rajkot."

Bell, who scored 91 in the first warm-up game, compiled 108 off 125 balls at the top of the order before he was trapped lbw by Varun Sood, while Morgan's 52 came at just under a run a ball before he was caught by India Under-19 captain Unmukt Chand off Jagrit Anand.

Sood returned figures of 3-45 but late runs from Craig Kieswetter, with 41 not out from 27 balls, lifted the tourists to just short of 300.

The England total appeared formidable but former India batsman Dhawan and Chand (37) attacked from the off.

Dhawan was finally dismissed for 110 off 109 balls, but rookie Milind Kumar (78 not out) and Rajat Bhatia, with 45 not out off 33 balls, saw the hosts home with ease.