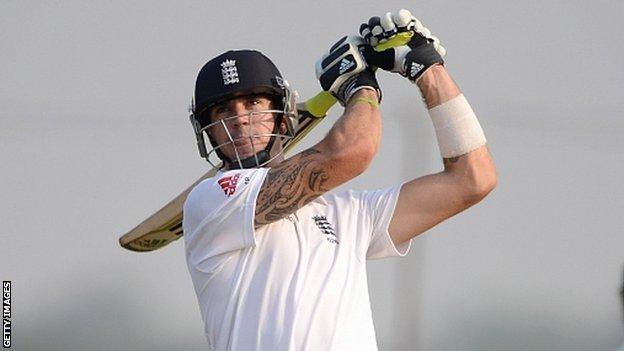 Kevin Pietersen has signed a full central contract with the England team.

Pietersen's international future was in doubt last year after he was dropped in August for sending "provocative texts'" to South Africa players.

The 32-year-old was not initially picked for the winter tour of India but later agreed a four-month deal.

He scored 186 in the second Test in Mumbai and also made two half-centuries as England won 2-1, their first series victory in India since 1984-85.

Pietersen is now eligible for all three international formats, which had seemed unlikely at one stage in an eventful 2012, and like 10 other England players is centrally contracted until 30 September.

Last May, the South-African born batsman announced his retirement from one-day internationals, which the England hierarchy insisted would also have to apply to Twenty20 internationals.

However, Pietersen effectively reversed his decision by pledging his full commitment to all three England teams in a YouTube video published on 11 August.

But following a spectacular century against South Africa in the second Test at Headingley in the same month, details emerged of texts in which he was alleged to have criticised then England captain Andrew Strauss and offered tactical advice to the tourists.

Pietersen, who made his international debut in 2004, was dropped for the final match of the series, which the South Africans won 2-0, left out of the squad for the World Twenty20 tournament in Sri Lanka and overlooked for a central contract.

He apologised to Strauss, who retired from all forms of cricket after the South Africa series, and a series of meetings with England senior players and officials followed, with Pietersen subsequently offered a four-month contract and shortly afterwards a place in the squad to tour India.

During the trip, England coach Flower said of the turmoil over the texts: "We did move on from it as soon as we had our meetings and everyone made a commitment to do so.

"We don't all always get on with people all of the time - any of us, in any walk of life - and everyone has made an effort to make it work.

"It's been really good fun and he should be very proud of the way he's operated out here, both as an individual and as a player."

Pietersen is preparing for England's ODI series in India but will be rested for the three one-day matches and three Twenty20 internationals in New Zealand in March as part of the policy of rotating senior players.

Former England spinner Ashley Giles is in charge of the team in India in his new role as limited overs coach and he said: "Kevin has now signed up fully.

"He is fully back on board. It is great news. Whatever happened in 2012, we're moving into a new year now. It's great for me to have him here. His experience in this side in this part of the world is invaluable."