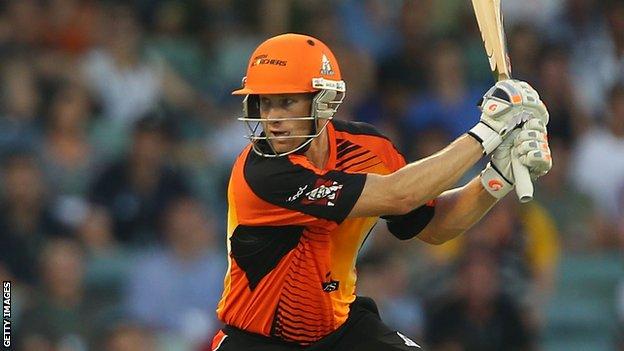 The 33-year-old Australian will be available for the whole tournament.

Fraser told BBC London 94.9: "Trying to get someone is very difficult with the international schedule.

"Adam ticked every box. He's got the experience, has the record, is a good man and is available. I hope it proves to be a good selection."

Voges has experience of the Indian Premier League, having played for Rajasthan Royals, and is currently representing Perth Scorchers in Australia's Big Bash League.

The Australian has scored 2,550 runs in 102 domestic Twenty20 games, averaging almost 32 in the short-form of the game.

"In Twenty20, when it is high-risk, his average shows someone who performs more often than he doesn't," Fraser continued.

"He has got the experience of knowing what to do, he has captained in Twenty20 and has got a good head on his shoulders.

"I think the all-round package is very attractive."

Fraser says group-stage exits in each of the last two seasons convinced the club they needed an overseas player who could play a large part in their campaign.

"We looked to how we performed in the last couple of years and we were disappointed," Fraser said.

"Last year we went for [Lasith] Malinga and thought he fitted the role but unfortunately he didn't come and we went with the players we've got.

"We were always 5, 10 or 15 runs away from winning and were making a few mistakes at crucial times.

"We had to look for someone with a bit of experience and a proven record."

Meanwhile Fraser says the club will wait until closer to the tournament before they pursue a second overseas player.

"We have got the potential for another overseas signing, as Chris Rogers is not going to play Twenty20 for us this year," he added.

"We'll leave that a bit further down the line and see what happens with injuries on our front, who does well and to leave our options open."