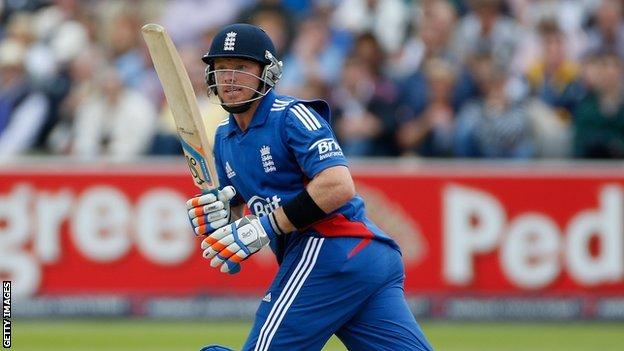 England held their nerve to edge out India by nine runs in a stirring opening one-day international.

Batting first on a flat pitch, an opening partnership of 158 between captain Alastair Cook (75) and Ian Bell (85) set England on the road to 325-4.

India stayed in the game thanks to half-centuries from Gautam Gambhir, Yuvraj Singh and Suresh Raina.

But James Tredwell took 4-44 and Jade Dernbach removed the dangerous Mahendra Dhoni as the hosts fell short on 316-9.

England's victory was their first in 14 away matches against India - a barren run stretching back to April 2006 - and gave Ashley Giles a winning start as limited-overs coach.

The tourists are top of the one-day rankings but had suffered 5-0 whitewashes on their last two visits to India and were comprehensively beaten in their two warm-up matches for this series.

Nonetheless, England began in a confident manner as Cook and Bell took advantage of a fast outfield to pepper the boundary at will.

With the merest push through a gap in the field racing away for four, the duo did not need to be overly aggressive as they put on England's highest opening partnership against India.

India's spinners checked England's progress in the middle of their innings and, with runs starting to dry up, Bell and Cook began to take risks.

Bell was eventually run out by Rahane's direct hit from short fine leg and Cook was caught by the same fielder after top-edging a sweep off Raina.

Kevin Pietersen (44) and Eoin Morgan (41) both perished just when they were starting to find their range and it was left to Samit Patel and Craig Kieswetter to ensure England reached the total the conditions demanded.

Patel was England's aggressor-in-chief, smashing 44 off 20 balls as England plundered 59 off the last four overs of their innings, with Ishant Sharma conceding 86 runs from his 10 overs.

India started their reply in a similar vein to England as Ajinkya Rahane and Gambhir put on 96 inside 17 overs.

"England held their nerve and their catches to make a fabulous start to the tour. Cook and Bell serenely compiled a 158-run first wicket partnership on a belter of a batting wicket but England still needed Patel's 20-ball knock of 44 to post a competitive score.

"There was little margin for error with the ball - especially after India rattled up 66 in the first 10 overs. But James Tredwell, ably assisted by Joe Root on a debut in which he didn't bat, bowled superbly - first by stemming the flow of runs on a wicket which wouldn't turn, and then by taking the four wickets which helped England home."

But both fell in quick succession to Tredwell, with Rahane caught at long-off and Gambhir chipping to Bell at midwicket before Virat Kohli was caught behind off Tim Bresnan.

Yuvraj wrestled the momentum back India's way with a typically belligerent batting display, rattling 61 off 54 balls - his 50th one-day half-century.

Alongside Raina, he looked capable of taking the match away from England, only to spoon Tredwell to Dernbach at short fine leg.

Raina was granted a controversial reprieve on 46 when the third umpire ruled that Tim Bresnan had grounded the ball in taking a catch at third man.

But his luck did not last much longer as a leading edge presented Tredwell with a simple return catch.

Dhoni, so often the scourge of England in the past, struck four huge sixes to take India within sight of victory. But with 55 needed from 35 balls, he failed to middle a drive off Dernbach and picked out long-off.

Three balls later, Jadeja played on to Dernbach to leave India without a recognised batsman and, although their tail-enders took the match into the final over, England maintained their composure to clinch the win.

Cook says his team need to win the series - which continues on Tuesday in Kochi - to justify their number one billing, and on this evidence they look good value to realise their captain's ambition.