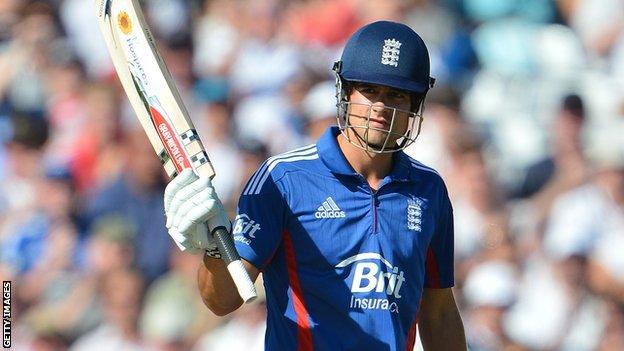 England captain Alastair Cook said every member of his team could feel proud after a nine-run victory in Rajkot ended a run of 13 away matches without a one-day win against India.

His men scored 325-4 after winning the toss and kept their composure to restrict the hosts to 316-9 in reply.

Cook, who paved the way with 75, said: "Obviously it was a good win. Everyone in that dressing room can be proud.

"It was a good toss to win, a good wicket and we made the most of it."

England's triumph - which gives them a 1-0 lead in the five-match series - was a real team effort. Every member of the top six scored valuable runs before the wickets were shared between the four frontline bowlers.

"England held their nerve and their catches to make a fabulous start to the tour. Cook and Bell serenely compiled a 158-run first wicket partnership on a belter of a batting wicket but England still needed Patel's 20-ball knock of 44 to post a competitive score.

"There was little margin for error with the ball - especially after India rattled up 66 in the first 10 overs. But James Tredwell, ably assisted by Joe Root on a debut in which he didn't bat, bowled superbly - first by stemming the flow of runs on a wicket which wouldn't turn, and then by taking the four wickets which helped England home."

On a batsman-friendly pitch, Ian Bell top-scored with 85 in an opening partnership of 158 with Cook before Samit Patel and Craig Kieswetter finished the innings in style with an unbroken 70 stand off 37 balls.

"Clearly if we were being a bit greedy then we would want one of us to go on and make a big hundred and get the score up to 330-340," added Cook.

"But then Samit and Craig came in and got 60 off the last five overs which made a big difference."

In India's reply, off-spinner James Tredwell proved himself a more than capable stand-in for the rested Graeme Swan, taking four wickets, and Jade Dernbach took the crucial wicket of Mahendra Dhoni just when the India skipper was threatening a match-winning knock.

"A score of 325 to defend was a good target. They kept coming at us but at the crucial times we got the wickets," Cook said. "Tredwell was exceptional on that wicket to get four wickets."

Dhoni expressed frustration that his team could not hold on for a victory after reaching 271-5 in the 45th over.

"Frankly we should have got that - it was a very fast outfield," he said. "You got value for your shots and if you found the gaps more often than not it hit the boundary.

"I should have batted a few more overs and we would have got them."