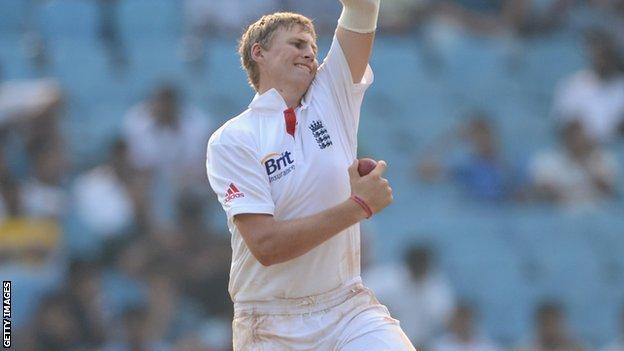 Joe Root says he wants to be an all-rounder, following his one-day international debut in England's over India.

The 22-year-old Yorkshireman bowled nine overs of off-spin for 51, but did not get a chance to bat on either his ODI or Twenty20 debuts.

"If I'm going to get opportunities, I'll have to try to offer with the ball and in the field," Root told BBC Sport.

"That's the plan, I'll definitely be working hard on it."

"It was a brilliant start to the 21-year-old's Test career, as he did everything which was expected of him when he was given his chance in place of Samit Patel."

Root was chosen for the squad primarily as a batsman after averaging 43.41 for Yorkshire in the County Championship last season.

On his Test debut against India in December, Root made 73 batting at number six - but Jos Buttler was preferred in that position on Root's Twenty20 debut, with Samit Patel batting there in the one-day game.

The youngster has been practising with Yorkshire bowling coach Jack Berkinshaw, plus England bowling consultant and former Pakistan leg-spinner, Mushtaq Ahmed, while in India.

And Root said: "I knew my role was going to be to bowl as many dot balls as possible.

"Mushy worked really hard with me just making sure I get my basic technique right and then take it from there. "

Root added that he is not frustrated at the lack of batting opportunities so far, saying: "I'm really pleased with how it has gone and looking forward to the rest of the tour now."

Root will captain the England Lions team as they tour Australia, and added: "It's an opportunity; it's something that I've not done before and another great way of learning the game. I look forward to that as well."