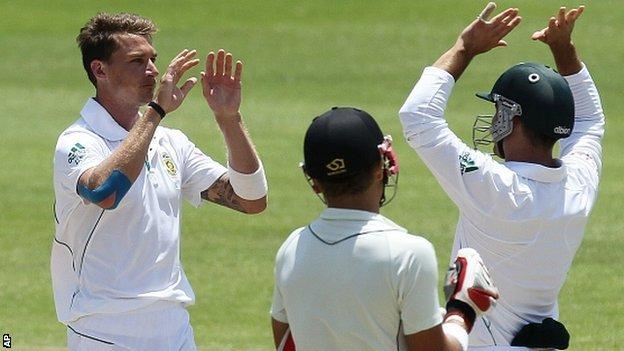 South Africa wrapped up a resounding win over New Zealand in the second Test to complete a 2-0 series victory.

Paceman Dale Steyn took three wickets on the fourth morning as the tourists were reduced from 203-5 to 211 all out, losing by an innings and 193 runs.

New Zealand made a solid start to the day, with Dean Brownlie and BJ Watling completing their fifties.

But they collapsed after Jacques Kallis had Brownlie (53) caught behind, losing their last six wickets for 29 runs.

The new ball was the catalyst as Morne Morkel had Colin Munro caught at third slip by Alviro Petersen for 15.

Steyn then took his first wicket of the day in the following over, ending Watling's resistance for 63 with a fiendish delivery that pegged back the batsman's off-stump.

New Zealand's last three wickets fell in successive overs - Steyn had Doug Bracewell caught in the slips and, after Morkel had Trent Boult pouched at point, he dismissed Neil Wagner caught behind to finish the match.

South Africa won the first Test by an innings and 27 runs in Cape Town and remain the top-ranked team in the International Cricket Council's Test rankings, above England.

The Proteas and Kiwis will now play three one-day internationals, starting on Saturday in Paarl.

New Zealand will then host England in three Twenty20 matches, three ODIs and three Tests, the first of which starts on 6 March.