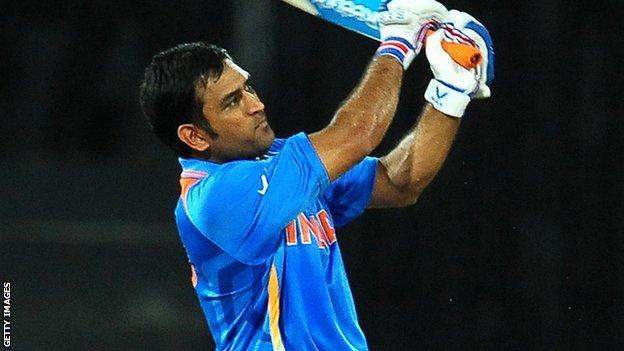 India outplayed England to inflict a crushing 127-run defeat and level their five-match one-day series at 1-1.

Captain Mahendra Dhoni (72) and Ravindra Jadeja (61 not out) blasted 82 off the last six overs as India accelerated to 285-6.

Seamer Bhuvneshwar Kumar then removed Kevin Pietersen and Eoin Morgan in the space of three balls to rip the heart out of England's batting line-up.

India's spinners did the rest as the tourists were all out for a dismal 158.

England's batting performance was as dispiriting as it had been uplifting in Friday's first one-day international, when they racked up 325-4 batting first and held on for a nine-run win.

The loss of Ian Bell - caught behind in the second over by Shami Ahmed - got things off to an inauspicious start and, after captain Alastair Cook had been harshly adjudged lbw to Kumar, the same bowler struck twice in the 15th over to deal a fatal blow to the visitors' hopes.

Pietersen was bowled through the gate for 42 by a ball that jagged back sharply off the seam and Morgan was brilliantly caught one-handed by wicketkeeper Dhoni from a ball which moved away from the left-hander.

The promising Jadeja added the wickets of Joe Root for 36 and Chris Woakes to his superb cameo with the bat and Ravichandran Ashwin took three wickets as England's tail-enders offered little resistance when faced with a lost cause.

After winning the toss, India were largely kept in check by some disciplined England bowling until Dhoni and Jadeja provided the fireworks that a raucous crowd at Kochi's Nehru Stadium had been craving.

They lost both openers cheaply as Gautam Gambhir was clean bowled by Jade Dernbach and Ajinkya Rahane perished in an almost identical manner to Steven Finn.

Yuvraj Singh looked in good form for his 32 and was furious to be given out lbw to James Tredwell's second ball after umpire Steve Davis failed to spot a bottom edge onto the pad.

"England were unable to cope with an inspired Indian attack and succumbed to a heavy defeat with 14 overs to spare. Bhuvneshwar Kumar took three wickets in three overs with seam and swing, and England had no answer to the left-arm spin of Ravindra Jadeja, who deceived both Joe Root and Chris Woakes with the arm ball.

"Earlier, England had produced their best bowling display of the tour to restrict India to 177-5 after 40 overs. Steven Finn bowled superbly, but even he was powerless to prevent a brutal late onslaught from Mahendra Dhoni and Jadeja, who was deservedly named man of the match."

Virat Kohli and Suresh Raina both added useful runs without ever really getting on top of the England attack, and when Raina was caught by Bell off Woakes on the point boundary to leave his team 174-5 in the 40th over, India were in need of some late-innings impetus.

Enter captain Dhoni, who found a willing accomplice in the 24-year-old Jadeja.

Just as England's Samit Patel and Craig Kieswetter had in the first one-dayer, they exploited new fielding regulations - which only allow four men outside the circle in non-powerplay overs - to find the boundary with alarming regularity in a partnership of 92 off 10 overs.

Dhoni, who survived an appeal for caught behind off Woakes when he was in single figures, hit two sixes and seven fours. He deployed his trademark helicopter shot to devastating effect as both Finn and Dernbach were catapulted through the finest of gaps on the leg side.

Dhoni's dismissal in the final over - caught on the cover boundary by Root - merely cleared the stage for Jadeja to finish the innings with a blistering blast of two fours and a six, propelling India to a total that proved to be well beyond England.

The third match of the series takes place on Saturday in Ranchi.