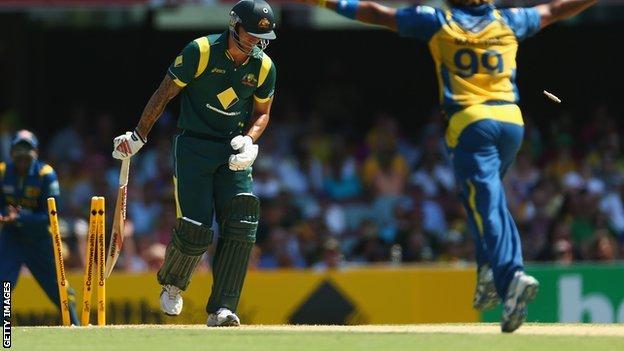 Australia narrowly avoided being bowled out for their lowest one-day international total on the way to a four-wicket defeat by Sri Lanka.

The home side were dismissed for 74, just passing the low score of 70 they had fallen for twice before.

Sri Lanka made hard work of the chase at the Gabba, slipping to 37-4 before getting over the line on 75-6.

The tourists lead the five-match series 2-1, with the fourth match taking place in Sydney on Sunday.

Nuwan Kulasekara did most of the damage for Sri Lanka, removing four of the Aussies' top five on the way to figures of 5-22 as the hosts capitulated to 40-9.

Last-wicket pair Mitchell Starc (22 not out) and Xavier Doherty (15) at least took Australia past their record low with a stand of 34 before Doherty fell to Shaminda Eranga.

Sri Lanka, though, struggled with their meagre chase, as Mitchell Johnson (3-11) caused havoc at the top of the order.

Tillakaratne Dilshan (22) had already made a severe dent in the chase before he became Johnson's first victim, with Lahiru Thirimanne and Angelo Mathews went in successive deliveries.