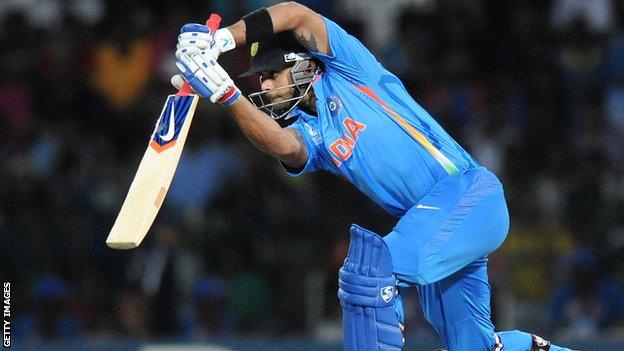 England succumbed to another batting collapse as India took a 2-1 lead in the five-match one-day series with a seven-wicket victory in Ranchi.

In the first international staged in the home town of India skipper Mahendra Dhoni, England were all out for 155.

Kevin Pietersen (17) and Ian Bell (25) fell within three balls and three more wickets went for one run in nine balls.

Virat Kohli struck a sparkling unbeaten 77 and Dhoni hit the winning boundary as his team won with 21.5 overs left.

It was England's lowest score batting first in a completed one-day international since they made 146 against New Zealand in the Champions Trophy in Johannesburg in 2009, some 68 matches ago.

Their 155 is only three less than they mustered in the previous match on Tuesday chasing under the lights, and a second successive defeat sends England down another place to number three in the ODI rankings.

Alastair Cook and his team must find a cure for deja vu by the time they get to Mohali as England's batting frailties in Indian conditions are all too apparent once more.

For the second match in a row they lost wickets in clusters, Kieswetter and Patel were bamboozled by deliveries from Jadeja that went on with the arm.

England couldn't find the same movement or turn as India's bowlers, as the pitch flattened out, and Kohli's dominant innings settled the match.

The latest collapse could not attributed to the Ranchi surface however, which produced pace, bounce, spin and a smooth outfield offering reward for positive strokeplay.

But a hesitant start rather set the tone for the problems that were to follow for the tourists, Alastair Cook (17) making a rare low score when given out shuffling across his stumps in the eighth over to persistent seamer Shami Ahmed.

Bell looked uncharacteristically sketchy and took 15 balls to get off the mark, but he and Pietersen appeared to be building a platform when their partnership of 44 was brought to an abrupt halt by an unfortunate umpiring decision.

Pietersen hit successive boundaries, a delightful drive down the ground and an authoritative pull shot through mid-wicket, before umpire S Ravi deemed that a fine delivery from Ishant Sharma clipped the edge of the bat, rather than clothing as replays suggested, as it zipped away off the seam.

Bell departed three balls later to a smart catch by Dhoni at the stumps and it was left to Joe Root in only his third one-day international to shore up the innings.

He soon lost Eoin Morgan, who has frequently invigorated England with innovative shot selections, but a reverse sweep at a ball rising sharply spooned high off the bat to short third man.

Further calamity ensued in the next over when the seemingly innocuous slow left-armer Ravi Jadeja collected two wickets in five deliveries.

Craig Kieswetter, who has now failed to reach fifty in his last 12 ODI innings, left an alarming gap between bat and pad as he pushed forward and was bowled for a duck, while Samit Patel was lbw, also without troubling the scorers.

With wickets falling so frequently powerplays were of little relevance, but Root, having shown admirable calm during the deluge of departures, fell for 39 in the first of the five overs of batting powerplay.

Remaining matches in the series

Striving to accelerate the scoring, Root drove at a wide one and was expertly caught low by Dhoni diving to his right to end 47 runs of Yorkshire resistance in combination with Tim Bresnan.

The burly all-rounder fell in the next over for 25 as Ravichandran Ashwin found some appreciable turn to bowl him through the gate and the final three wickets were quickly taken for the addition of only 10 runs.

Steven Finn would have preferred a larger total to defend but he gave England some faint hope in the third over when a fast, full delivery uprooted Ajinkya Rahane's off stump.

But Kohli seized on some short deliveries from Jade Dernbach with three successive boundaries and some delightfully wristy strokes in his 22nd ODI half century, also passing 4,000 ODI runs.

Dependable spinner James Tredwell had Gautam Gambhir caught at mid-on but it merely delayed the inevitable as Yuvraj Singh fired 30 in 21 balls.

Dernbach went for 14 runs in an over and conceded 45 from his five, although Yuvraj was bowled by a sharply turning delivery from Tredwell, his seventh scalp of the series.

The wicket was greeted with great excitement by the fervent 40,000 crowd as it brought their hero Dhoni to the crease, and he soon crashed a straight drive into the stumps at the non-striker's end with such ferocity that the ball still went for four.

Fittingly, it was Dhoni who ended proceedings with a pull to the mid-wicket fence, joining Sourav Ganguly on 76 ODI wins as India captain behind only Mohammad Azharuddin's 90, and leaving England with much to ponder before the penultimate match of the series on Wednesday.