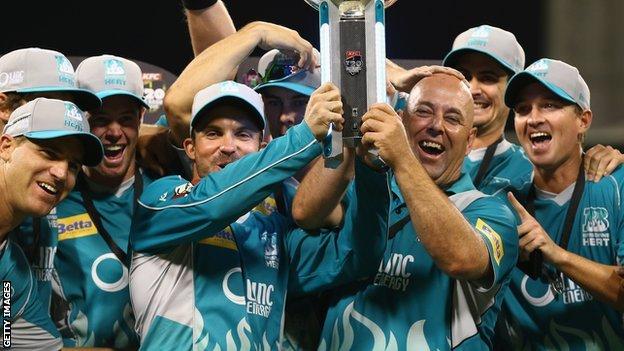 Needing 168 to win, the Scorchers never go to grips with the chase, falling short on 133-9, with West Indies paceman Kemar Roach taking 3-18.

The final defeat is the second in as many years for the Scorchers, who were beaten by Sydney Sixers in 2012.

Perth had reached the final in dramatic style, as Mike Hussey hit the winning runs from the final ball of their semi-final against Melbourne Stars.

But Hussey, batting at number six, did not arrive at the crease in the final until the 14th over, at which point the hosts needed 71 from 37 deliveries.

It was too big an ask and, when Hussey fell in the 17th over, it began a collapse that saw the Scorchers lose five wickets for five runs.

Brisbane had only made the semi-finals on net run-rate and then hammered league winners Melbourne Renegades to reach the final.

By reaching the final, both Brisbane and Perth have qualified for the Champions League T20.