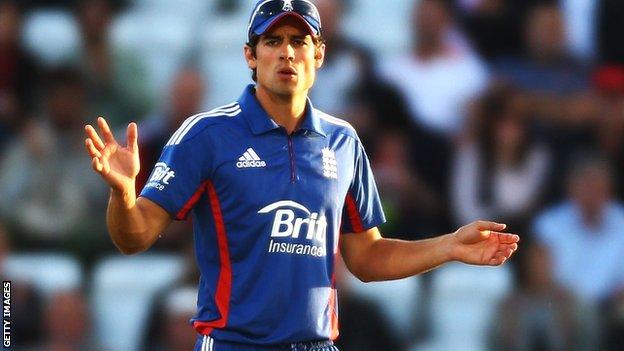 England captain Alastair Cook admitted his team have to improve quickly after losing heavily again to India to slip 2-1 behind in the one-day series.

The tourists were bowled out for just 155, with India needing barely 28 overs to reach the modest target in Ranchi.

"We've got to be clear and start producing the goods out in the middle and not just talk about it," Cook said.

"We've got some quality players and if we want to win we need to stand up as batsmen and deliver."

Mahendra Dhoni asked England to bat first in the first international staged in his home town, the 42nd Indian venue for one-day internationals.

But England struggled to find any fluency, reaching only 34-1 after 10 overs, and soon losing key batsmen Kevin Pietersen and Ian Bell within three deliveries.

"Alastair Cook and his team must find a cure for deja vu by the time they get to Mohali as England's batting frailties in Indian conditions are all too apparent once more.

"For the second match in a row they lost wickets in clusters, most crucially when Morgan was caught off an ill-advised top-edged reverse sweep. And then in the very next over both Kieswetter and Patel were bamboozled by deliveries from Jadeja that went on with the arm.

"England couldn't find the same movement or turn as India's bowlers, as the pitch flattened out, and Kohli's dominant innings settled the match."

"It's kind of a catch 22 at the top there, it was moving around but you had to score - 230 wasn't going to be good enough because we knew it would flatten out," said Cook, who was the first man to fall, lbw for 17.

"We got it wrong, one of the skills you need is being able to judge a good score and we didn't get anywhere near it.

"It's an old cliche but partnerships are crucial for building big scores and when you lose wickets in clusters that puts the opposition on a high and you lose the momentum you've built up."

A second successive defeat for England dropped them to third in the rankings, a rapid decline after they consolidated their place at number one by scoring 325-4 in the first match in Rajkot and winning by nine runs.

"It's frustrating because you look back to Rajkot where we played really nicely and it's quite hard to explain why we haven't played well in these last two games.

"It's important we don't over-complicate it when we come to Mohali. We've all delivered before for England and it's a matter of taking it upon ourselves as a team, as the lucky 11 who go out there, to deliver the goods."

England's chief tormentor in Ranchi was gentle slow left-armer Ravi Jadeja, who took 3-19 including the wickets of Craig Kieswetter and Samit Patel within five balls.

"He bowled nicely and we've found him hard to score off as well," the England captain conceded.

"Credit to him, they're allowed to bowl well, and we've got to find a method, not just against him but against all their bowlers, to build a big score."

Dhoni, who hit the winning runs, said of international cricket's latest venue: "I've played a lot of cricket here. It's one of the best facilities... a fabulous stadium and fans who were excited about this game.

"Everything went well. It was a perfect script. It's important to take the positives out of each and every game and areas we needed to work on after the first game we made sure we worked on.

"We are gelling well as a unit. I think we'll take a lot of confidence from this game and we're looking forward to the next one."

The penultimate match of the series is another day-night encounter, and takes place in Mohali on Wednesday.