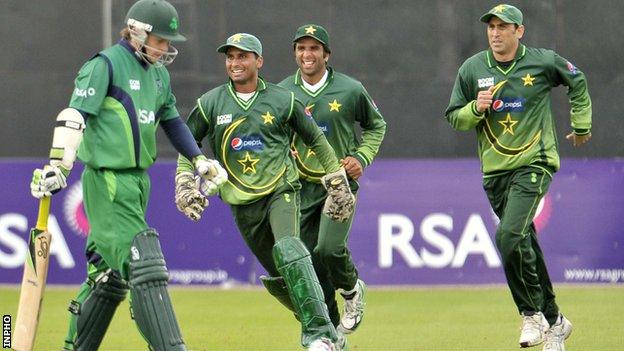 Ireland have announced a two-match ODI series against Pakistan in May, with venues still to be finalised.

Pakistan will use the games on 23 and 26 May as preparation for the Champions Trophy in England.

"It's fantastic news - Pakistan are a formidable one-day side and it's a great way of measuring where we are as a team," said Irish coach Phil Simmons.

Irish cricket has been improving consistently and we will be looking forward to some competitive games ahead of the Champions Trophy.

Pakistan, who won both games against Ireland in 2011, beat India 2-1 in a one-day series last month.

Simmons added: "It's shaping up to be a busy summer for Irish cricket.

"In addition to this game, a four-day clash with Australia A as they warm up for The Ashes, a proposed series against Bangladesh and of course the RSA Challenge against England at our new international ground in Malahide."

Ireland's only victory against Pakistan in a one-day international came in the 2007 World Cup encounter in the West Indies, when Niall O'Brien played the innings of a lifetime.

The left-hander made a superb 72 in difficult conditions as Ireland chased down a Pakistan total of 132 to secure a three-wicket win - a result which reverberated around the cricketing world.

"We are eagerly awaiting our matches against the Irish team," said Pakistan head coach Dav Whatmore.

"Irish cricket has been improving consistently and we will be looking forward to some competitive games ahead of the Champions Trophy.

"The fixtures are a continuation of the PCB's support to all Associate Member nations, and we are delighted to be returning once again to Ireland."