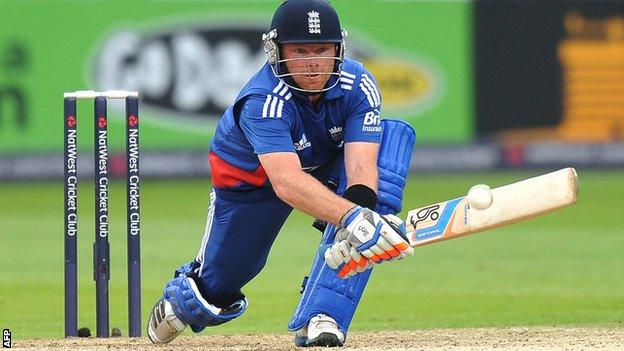 England's Ian Bell is keen to continue as an opener in one-day internationals.

Bell made 85 in the first ODI against India but England have lost the last two matches and need to win in Mohali on Wednesday to keep the series alive.

"It's where I want to bat, at the top of the order, but we've got a lot of flexibility in this team," he said.

"It suits my game. With the two new balls now you have to be able to get through the first few overs and we have the firepower in that middle order."

Bell, 30, has played 122 one-day internationals for England since making his debut with Kevin Pietersen against Zimbabwe in 2004.

After previous experiments at the top of the order, Bell returned to open the innings when Pietersen announced his ODI retirement in May and has maintained his place alongside skipper Alastair Cook despite Pietersen's return to the team.

He scored 126 against West Indies in his first match back as opener in June and in 14 internationals from that point has made 660 runs at an average of 50, with five half centuries in addition to that hundred, which came at Southampton.

England, who recorded their first Test series win in India since 1984-85 late last year, have lost their way in the current one-day series, having taken the lead with a nine-run win.

They have scored less in the last two matches combined than the 325-4 they posted in the first game in Rajkot and Bell admitted: "We haven't quite executed our plans right.

"If we do our basics right, which I don't think we have in the last two games, then I think we can get a performance."

India skipper Mahendra Singh Dhoni hit an explosive 72 as his side won match two in Kochi and on Saturday India went ahead in the five-match series after bowling the tourists out for a mere 155, their lowest score batting first in a completed ODI since 2009.

"Credit to India, they've been outstanding. Dhoni turned the momentum round with his innings at Kochi and we never quite got it back," Bell said.

"They're a fantastic team at home but we've got an opportunity to put in a performance that will win a game."

Dhoni's team had won their last seven ODI home series before Pakistan inflicted a 2-1 defeat earlier this month and Bell added: "The stats say India don't lose a lot at home in any form of the game.

"This is a very tough place to come and play cricket but we've already shown we've got the talent to win out here.

"We've got to turn up to the next game believing we can win and I'm sure we'll do that."