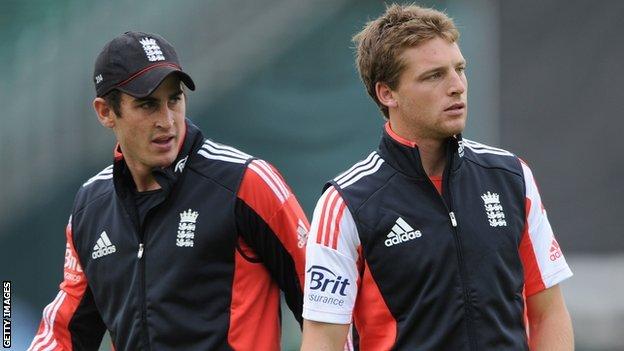 Kieswetter, 25, has not missed an ODI since the 2011 World Cup, but his place has been debated for some time.

He got out to poor shots in the second and third one-day internationals, and was bowled for a duck in the latter.

The 22-year-old, who has less experience with the gloves than Kieswetter, hit an unbeaten 33 in England's five-wicket defeat in Pune on 20 December before hitting 15 not out to help his side to a six-wicket win in Mumbai two days later.

India lead the one-day series 2-1 with two matches remaining, and England's training session on the eve of Wednesday's fourth game in the five-match series saw Buttler put through an extensive keeping drill in Mohali.

The session ended with Buttler donning the gloves in catching practice alongside slips Alastair Cook and James Tredwell.

Spinner Tredwell admits changing wicketkeeper mid-series is not the ideal scenario, but is confident in Buttler's ability, should he get the nod in Mohali.

"I guess as a bowler you do like to have a relationship [with the keeper], that's great, but unfortunately in the cut and thrust of sport you don't often get to do it like that," said the Kent captain.

"Teams do chop and change. We'll see what happens.

"Jos is a talented boy. I've not seen a lot of him keeping but I've seen him with the bat.

"I imagine if he's got anywhere near the talent with the gloves that he does with the bat he'll be fine."

Meanwhile, concerns over Steven Finn's fitness appear to have faded.

The pace bowler was struck on the right index finger in fielding practice on Monday but is expected to be available.