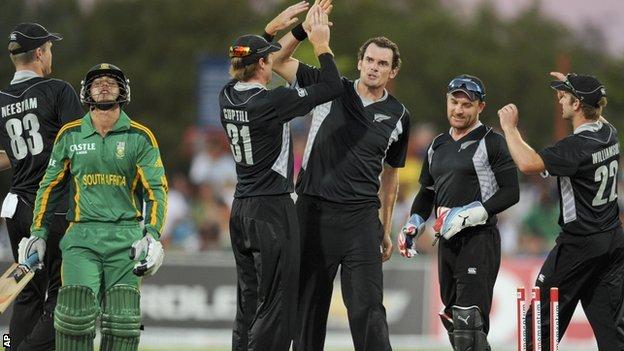 New Zealand clinched their first series victory in South Africa in any format with a 27-run win in Kimberley to take an unassailable 2-0 lead in the one-day international series.

The Kiwis, who lost both Tests by an innings, made 279-8, anchored by Kane Williamson's unbeaten 145.

But the hosts collapsed to 252 all out with no fewer than five men run out.

South Africa were without limited-overs captain AB de Villiers, who is serving a two-match suspension because of their slow over-rate in the first ODI.

The final game of the series takes place in Potchefstroom on Friday, before the Kiwis host England in February in March.

The tour starts with two Twenty20 warm-up games in Whangarei on 4 and 6 February against a New Zealand XI which will include former Black Caps captain Ross Taylor.

Taylor was replaced as skipper by Brendon McCullum last month after refusing to give up the limited-overs captaincy and decided to take a break from cricket, missing the South Africa tour, while New Zealand Cricket issued a public apology for the way he was treated.

Also in the squad for those warm-up games is wicketkeeper Luke Ronchi, 31, who was born in New Zealand but appeared in four ODIs and three Twenty20 internationals for Australia between 2008 and 2009.

He has now completed a four-year qualification period since his last appearance for the Aussies in January 2009, and is eligible to represent his homeland.