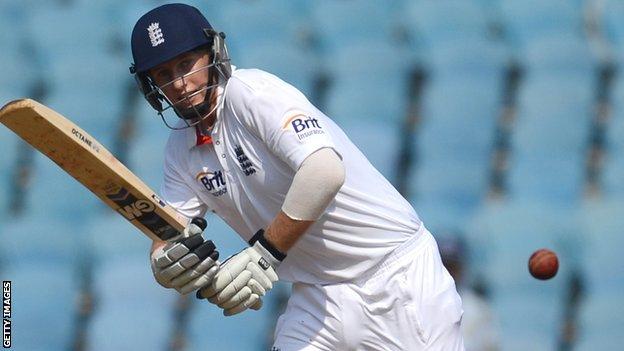 England were thoroughly outplayed for the third game in succession in Wednesday's fourth one-day international in Mohali, meaning their slim chance of winning the series has gone.

The final match in Dharamsala - a ground in the foothills of the Himalayas - will now effectively be a dead rubber and when England look back at what wrong in this series, they will have to focus first and foremost on the batting.

"Fica (Federation of International Cricketers Association) has said they have "significant concerns" over safety in Pakistan ahead of their new Twenty20 League.

"Pakistan is a country with a huge passion for the game and it has produced many world-class cricketers. However, players have to listen to their union when it comes to safety concerns.

That has been the biggest problem with scores of 150 in the second and third matches, which is very rarely enough to win matches, and the 257 at Mohali was below a par score.

The two new white balls did nip around at the start of England's innings which made run scoring hard work but apart from an outstanding innings from Joe Root, England would not have got 230 let alone the 280 they should have been looking at.

It should not be forgotten that England have left only one established batsman (Jonathan Trott) at home for this series, as opposed to three bowlers (James Anderson, Graeme Swann and Stuart Broad), so it is a concern that their batting has at times looked naive and unable to adapt to the match situation.

The one big positive to take from the batting is the way Joe Root played in his first one-day international series.

I picked the young Yorkshire batsman as one of my players to watch in 2013, because he instantly looked at home in international cricket - rather like Graham Thorpe and Marcus Trescothick did when they started their careers.

I have seen him play for Yorkshire, where he often bats in the middle order in one-day cricket, so I was aware he had the capability to play all around the wicket.

He has a mature head on young shoulders and the thing which impresses me most is his ability to understand and play to the situation. England scored 100 off the last 10 overs in Mohali and, together with a brief cameo from Jos Buttler, he was responsible for England reaching 257.

"The Test and one-day series in India have confirmed to me that DRS has to be used everywhere in international cricket, and the sooner the ICC insist on its use the better.

"There have been enough umpiring decisions made during the last couple of months to prove that its use will enhance the quality of the game. It's time it became uniform around the world."

I said before this series that England would want to add some depth to their squad, and they will be pleased to see Root progressing very nicely. Kevin Pietersen is also now back in the one-day team and James Tredwell's intelligent bowling proved he can play alongside or compete with Swann for a place in the full strength 11.

However, they will also look at the likes of Craig Kieswetter, Samit Patel and Jade Dernbach and question whether they have done enough to remain in the squad for New Zealand or go back to the domestic game and still learn what it takes to perform consistently at international level.

I supported Kieswetter and Dernbach in this column last week and I still believe they have plenty to offer. But they will have realised they still have plenty of tough lessons to learn to become consistent performers which is required at the very top level.

After the magnificent Test series victory before Christmas, England will have wanted to win this one-day series in India too.

But the management team will have learned a lot about each individual player, the team and the squad which will help as they plan ahead for Champions Trophy in England this summer and then aim to win the World Cup in Australia and New Zealand in 2015.